The rotors may be stationary. If one rotor is moved through an angle θ, the other selsyn shaft will move through an angle θ. If drag is applied to one selsyn, this will be felt when attempting to rotate the other shaft. While multi-horsepower (multi-kilowatt) selsyns exist, the main appplication is small units of a few watts for instrumentation applications– remote position indication.

Instrumentation selsyns have no use for starting resistors. (Figure above) They are not intended to be self rotating. Since the rotors are not shorted out nor resistor loaded, no starting torque is developed. However, manual rotation of one shaft will produce an unbalance in the rotor currents until the parallel unit's shaft follows. Note that a common source of three phase power is applied to both stators. Though we show three phase rotors above, a single phase powered rotor is sufficient as shown in Figure below.

Small instrumentation selsyns, also known as sychros, use single phase paralleled, AC energized rotors, retaining the 3-phase paralleled stators, which are not externally energized. (Figure below) Synchros function as rotary transformers. If the rotors of both the torque transmitter (TX) and torque receiver (RX) are at the same angle, the phases of the induced stator voltages will be identical for both, and no current will flow. Should one rotor be displaced from the other, the stator phase voltages will differ between transmitter and receiver. Stator current will flow developing torque. The receiver shaft is electrically slaved to the transmitter shaft. Either the transmitter or receiver shaft may be rotated to turn the opposite unit.

Synchro stators are wound with 3-phase windings brought out to external terminals. The single rotor winding of a torque transmitter or receiver is brough out by brushed slip rings. Synchro transmitters and receivers are electrically identical. However, a synchro receiver has inertial damping built in. A synchro torque transmitter may be substituted for a torque receiver.

Remote position sensing is the main synchro application. (Figure below) For example, a synchro transmitter coupled to a radar antenna indicates antenna position on an indicator in a control room. A synchro transmitter coupled to a weather vane indicates wind direction at a remote console. Synchros are available for use with 240 Vac 50 Hz, 115 Vac 60 Hz, 115 Vac 400 Hz, and 26 Vac 400 Hz power. 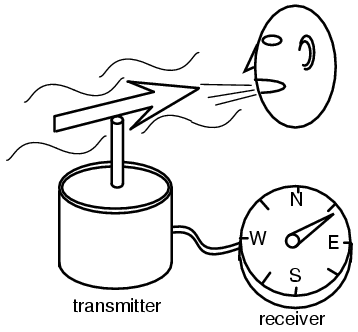 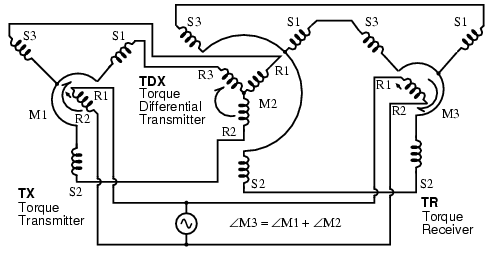 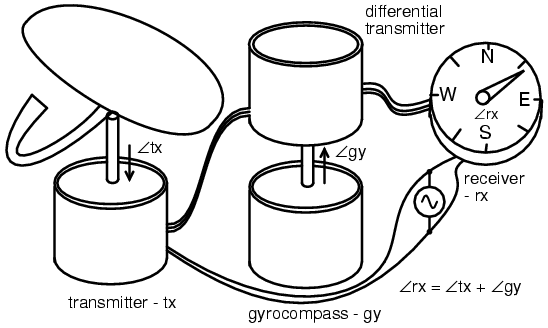 For example, ship's heading is ∠30o, antenna position relative to ship's bow is ∠0o, ∠antenna-N is:

The torque inputs in Figure above are TX and TDX. The torque output angular difference is TR.

The torque inputs in Figure above are TX and TDX. The torque output angular sum is TR.

The torque inputs in Figure above are TX1 and TX2. The torque output angular difference is TDR.

The torque inputs in Figure above are TX1 and TX2. The torque output angular sum is TDR.

A variation of the synchro transmitter is the control transformer. It has three equally spaced stator windings like a TX. Its rotor is wound with more turns than a transmitter or receiver to make it more sensitive at detecting a null as it is rotated, typically, by a servo system. The CT (Control Transformer) rotor output is zero when it is oriented at a angle right angle to the stator magnetic field vector. Unlike a TX or RX, the CT neither transmits nor receives torque. It is simply a sensitive angular position detector. 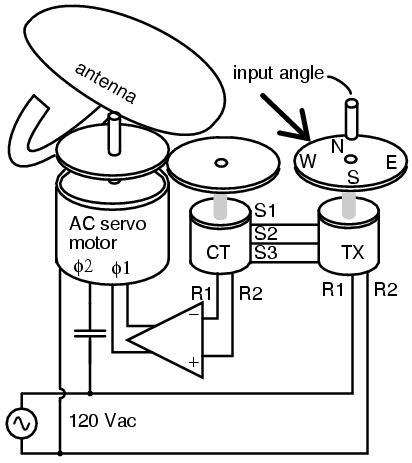 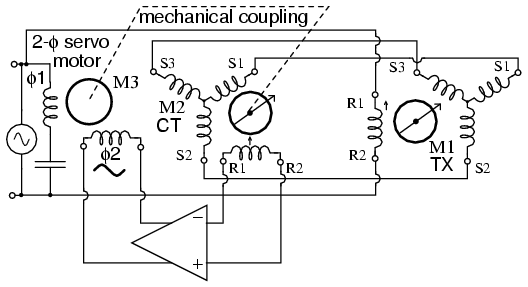 When the control transformer rotor detects a null at 90o to the axis of the stator field, there is no rotor output. Any rotor displacement produces an AC error voltage proportional to displacement. A servo (Figure above) seeks to minimize the error between a commanded and measured variable due to negative feedback. The control transformer compares the shaft angle to the the stator magnetic field angle, sent by the TX stator. When it measures a minimum, or null, the servo has driven the antenna and control transformer rotor to the commanded position. There is no error between measured and commanded position, no CT, control transformer, output to be amplified. The servo motor, a 2-phase motor, stops rotating. However, any CT detected error drives the amplifier which drives the motor until the error is minimized. This corresponds to the servo system having driven the antenna coupled CT to match the angle commanded by the TX.

The servo motor may drive a reduction gear train and be large compared to the TX and CT synchros. However, the poor efficiency of AC servo motors limits them to smaller loads. They are also difficult to control since they are constant speed devices. However, they can be controlled to some extent by varying the voltage to one phase with line voltage on the other phase. Heavy loads are more efficiently driven by large DC servo motors.

Resolver converts shaft angle to sine and cosine of angle.

The Cartesian coordinates (X, Y) may be plotted on a map display.

A TX (torque transmitter) may be adapted for service as a resolver. (Figure below)