Since a synchronous condenser does not supply a torque, the output shaft may be dispensed with and the unit easily enclosed in a gas tight shell. The synchronous condenser may then be filled with hydrogen to aid cooling and reduce windage losses. Since the density of hydrogen is 7% of that of air, the windage loss for a hydrogen filled unit is 7% of that encountered in air. Furthermore, the thermal conductivity of hydrogen is ten times that of air. Thus, heat removal is ten times more efficient. As a result, a hydrogen filled synchronous condenser can be driven harder than an air cooled unit, or it may be physically smaller for a given capacity. There is no explosion hazard as long as the hydrogen concentration is maintained above 70%, typically above 91%.

The efficiency of long power transmission lines may be increased by placing synchronous condensers along the line to compensate lagging currents caused by line inductance. More real power may be transmitted through a fixed size line if the power factor is brought closer to unity by synchronous condensers absorbing reactive power.

The ability of synchronous condensers to absorb or produce reactive power on a transient basis stabilizes the power grid against short circuits and other transient fault conditions. Transient sags and dips of milliseconds duration are stabilized. This supplements longer response times of quick acting voltage regulation and excitation of generating equipment. The synchronous condenser aids voltage regulation by drawing leading current when the line voltage sags, which increases generator excitation thereby restoring line voltage. (Figure below) A capacitor bank does not have this ability. 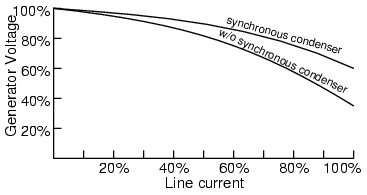 The capacity of a synchronous condenser can be increased by replacing the copper wound iron field rotor with an ironless rotor of high temperature superconducting wire, which must be cooled to the liquid nitrogen boiling point of 77oK (-196oC). The superconducting wire carries 160 times the current of comparable copper wire, while producing a flux density of 3 Teslas or higher. An iron core would saturate at 2 Teslas in the rotor air gap. Thus, an iron core, approximate µr=1000, is of no more use than air, or any other material with a relative permeability µr=1, in the rotor. Such a machine is said to have considerable additional transient ability to supply reactive power to troublesome loads like metal melting arc furnaces. The manufacturer describes it as being a “reactive power shock absorber”. Such a synchronous condenser has a higher power density (smaller physically) than a switched capacitor bank. The ability to absorb or produce reactive power on a transient basis stabilizes the overall power grid against fault conditions.