Shockley proposed the four layer diode thyristor in 1950. It was not realized until years later at General Electric. SCR's are now available to handle power levels spanning watts to megawatts. The smallest devices, packaged like small-signal transistors, switch 100's of milliamp at near 100 VAC. The largest packaged devices are 172 mm in diameter, switching 5600 Amps at 10,000 VAC. The highest power SCR's may consist of a whole semiconductor wafer several inches in diameter (100's of mm). 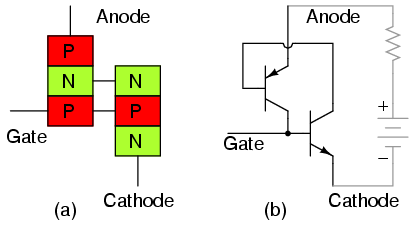 The silicon controlled rectifier is a four layer diode with a gate connection as in Figure above (a). When turned on, it conducts like a diode, for one polarity of current. If not triggered on, it is nonconducting. Operation is explained in terms of the compound connected transistor equivalent in Figure above (b). A positive trigger signal is applied between the gate and cathode terminals. This causes the NPN equivalent transistor to conduct. The collector of the conducting NPN transistor pulls low, moving the PNP base toward of its collector voltage, which causes the PNP to conduct. The collector of the conducting PNP pulls high, moving the NPN base in the direction of its collector. This positive feedback (regeneration) reinforces the NPN's already conducting state. Moreover, the NPN will now conduct even in the absence of a gate signal. Once an SCR conducts, it continues for as long as a positive anode voltage is present. For the DC battery shown, this is forever. However, SCR's are most often used with an alternating current or pulsating DC supply. Conduction ceases with the expiration of the positive half of the sinewave at the anode. Moreover, most practical SCR circuits depend on the AC cycle going to zero to cutoff or commutate the SCR.

The schematic symbols for an SCR and GTO are shown in Figures above (b &c). The basic diode symbol indicates that cathode to anode conduction is unidirectional like a diode. The addition of a gate lead indicates control of diode conduction. The gate turn off switch (GTO) has bidirectional arrows about the gate lead, indicating that the conduction can be disabled by a negative pulse, as well as initiated by a positive pulse.

In addition to the ubiquitous silicon based SCR's, experimental silicon carbide devices have been produced. Silicon carbide (SiC) operates at higher temperatures, and is more conductive of heat than any metal, second to diamond. This should allow for either physically smaller or higher power capable devices.