Superconducting devices, though not widely used, have some unique characteristics not available in standard semiconductor devices. High sensitivity with respect to amplification of electrical signals, detection of magnetic fields, and detection of light are prized applications. High speed switching is also possible, though not applied to computers at this time. Conventional superconducting devices must be cooled to within a few degrees of 0 Kelvin (-273 o C). Though, work is proceeding at this time on high temperature superconductor based devices, useable at 90 K and below. This is significant because inexpensive liquid nitrogen may be used for cooling.

Cooper pair: Lossless conduction in superconductors is not by ordinary electron flow. Electron flow in normal conductors encounters opposition as collisions with the rigid ionic metal crystal lattice. Decreasing vibrations of the crystal lattice with decreasing temperature accounts for decreasing resistance– up to a point. Lattice vibrations cease at absolute zero, but not the energy dissipating collisions of electrons with the lattice. Thus, normal conductors do not lose all resistance at absolute zero.

Electrons in superconductors form a pair of electrons called a cooper pair, as temperature drops below the critical temperature at which superconductivity begins. The cooper pair exists because it is at a lower energy level than unpaired electrons. The electrons are attracted to each other due to the exchange of phonons, very low energy particles related to vibrations. This cooper pair, quantum mechanical entity (particle or wave) is not subject to the normal laws of physics. This entity propagates through the lattice without encountering the metal ions comprising the fixed lattice. Thus, it dissipates no energy. The quantum mechanical nature of the cooper pair only allows it to exchange discrete amounts of energy, not continuously variable amounts. An absolute minimum quantum of energy is acceptable to the cooper pair. If the vibrational energy of the crystal lattice is less, (due to the low temperature), the cooper pair cannot accept it, cannot be scattered by the lattice. Thus, under the critical temperature, the cooper pairs flow unimpeded through the lattice.

If a voltage is applied across the junction, the current decreases and oscillates at a high frequency proportional to voltage. The relationship between applied voltage and frequency is so precise that the standard volt is now defined in terms of Josephson junction oscillation frequency. The Josephson junction can also serve as a hyper-sensitive detector of low level magnetic fields. It is also very sensitive to electromagnetic radiation from microwaves to gamma rays. 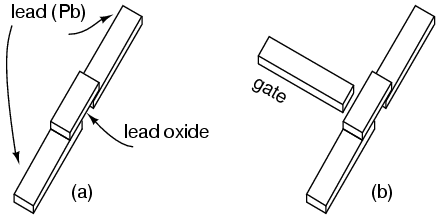 SQUID: A Superconduction quantum interference device or SQUID is an assembly of Josephson junctions within a superconducting ring. The DC SQUID is only considered in this discussion. This device is highly sensitive to low level magnetic fields.

A constant current bias is forced across the ring in parallel with both Josephson junctions in Figure below. The current divides equally between the two junctions in the absence of an applied magnetic field and no voltage is developed across across the ring. [JBc] While any value of Magnetic flux (Φ) may be applied to the SQUID, only a quantized value (a multiple of the flux quanta) can flow through the opening in the superconducting ring.[JBa] If the applied flux is not an exact multiple of the flux quanta, the excess flux is cancelled by a circulating current around the ring which produces a fractional flux quanta. The circulating current will flow in that direction which cancels any excess flux above a multiple of the flux quanta. It may either add to, or subtract from the applied flux, up to ±(1/2) a flux quanta. If the circulating current flows clockwise, the current adds to the top Josepheson junction and subtracts from the lower one. Changing applied flux linearly causes the circulating current to vary as a sinusoid.[JBb] This can be measured as a voltage across the SQUID. As the applied magnetic field is increased, a voltage pulse may be counted for each increase by a flux quanta.[HYP]

A SQUID is said to be sensitive to 10-14 Tesla, It can detect the magnetic field of neural currents in the brain at 10-13 Tesla. Compare this with the 30 x 10-6 Tesla strength of the Earth's magnetic field.

Rapid single flux quantum (RSFQ): Rather than mimic silicon semiconductor circuits, RSFQ circuits rely upon new concepts: magnetic flux quantization within a superconductor, and movement of the flux quanta produces a picosecond quantized voltage pulse. Magnetic flux can only exist within a section of superconductor quantized in discrete multiples. The lowest flux quanta allowed is employed. The pulses are switched by Josephson junctions instead of conventional transistors. The superconductors are based on a triple layer of aluminum and niobium with a critical temperature of 9.5 K, cooled to 5 K.