A circuit which removes the peak of a waveform is known as a clipper. A negative clipper is shown in Figure below. This schematic diagram was produced with Xcircuit schematic capture program. Xcircuit produced the SPICE net list Figure below, except for the second, and next to last pair of lines which were inserted with a text editor.

During the positive half cycle of the 5 V peak input, the diode is reversed biased. The diode does not conduct. It is as if the diode were not there. The positive half cycle is unchanged at the output V(2) in Figure below. Since the output positive peaks actually overlays the input sinewave V(1), the input has been shifted upward in the plot for clarity. In Nutmeg, the SPICE display module, the command “plot v(1)+1)” accomplishes this. 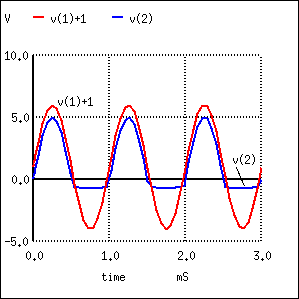 Closer examination of the negative clipped peak (Figure above) reveals that it follows the input for a slight period of time while the sinewave is moving toward -0.7 V. The clipping action is only effective after the input sinewave exceeds -0.7 V. The diode is not conducting for the complete half cycle, though, during most of it.

The addition of an anti-parallel diode to the existing diode in Figure above yields the symmetrical clipper in Figure below.

Diode D1 clips the negative peak at -0.7 V as before. The additional diode D2 conducts for positive half cycles of the sine wave as it exceeds 0.7 V, the forward diode drop. The remainder of the voltage drops across the series resistor. Thus, both peaks of the input sinewave are clipped in Figure below. The net list is in Figure above 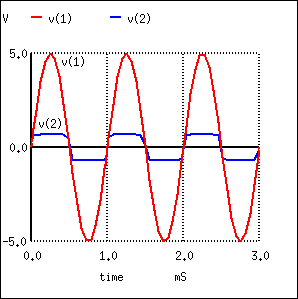 Diode D1 clips at -0.7 V as it conducts during negative peaks. D2 conducts for positive peaks, clipping at 0.7V.

The most general form of the diode clipper is shown in Figure below. For an ideal diode, the clipping occurs at the level of the clipping voltage, V1 and V2. However, the voltage sources have been adjusted to account for the 0.7 V forward drop of the real silicon diodes. D1 clips at 1.3V +0.7V=2.0V when the diode begins to conduct. D2 clips at -2.3V -0.7V=-3.0V when D2 conducts.

The clipper in Figure above does not have to clip both levels. To clip at one level with one diode and one voltage source, remove the other diode and source.

The net list is in Figure above. The waveforms in Figure below show the clipping of v(1) at output v(2). 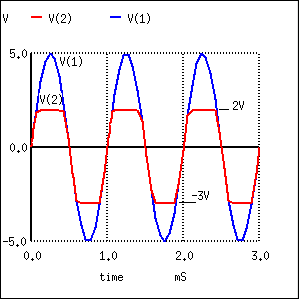 There is also a zener diode clipper circuit in the “Zener diode” section. A zener diode replaces both the diode and the DC voltage source.

A practical application of a clipper is to prevent an amplified speech signal from overdriving a radio transmitter in Figure below. Over driving the transmitter generates spurious radio signals which causes interference with other stations. The clipper is a protective measure.

A sinewave may be squared up by overdriving a clipper. Another clipper application is the protection of exposed inputs of integrated circuits. The input of the IC is connected to a pair of diodes as at node “2” of Figure above . The voltage sources are replaced by the power supply rails of the IC. For example, CMOS IC's use 0V and +5 V. Analog amplifiers might use ±12V for the V1 and V2 sources.