However, bipolar transistors don't have to be restricted to these two extreme modes of operation. As we learned in the previous section, base current "opens a gate" for a limited amount of current through the collector. If this limit for the controlled current is greater than zero but less than the maximum allowed by the power supply and load circuit, the transistor will "throttle" the collector current in a mode somewhere between cutoff and saturation. This mode of operation is called the active mode.

An automotive analogy for transistor operation is as follows: cutoff is the condition where there is no motive force generated by the mechanical parts of the car to make it move. In cutoff mode, the brake is engaged (zero base current), preventing motion (collector current). Active mode is when the automobile is cruising at a constant, controlled speed (constant, controlled collector current) as dictated by the driver. Saturation is when the automobile is driving up a steep hill that prevents it from going as fast as the driver would wish. In other words, a "saturated" automobile is one where the accelerator pedal is pushed all the way down (base current calling for more collector current than can be provided by the power supply/load circuit).

I'll set up a circuit for SPICE simulation to demonstrate what happens when a transistor is in its active mode of operation: 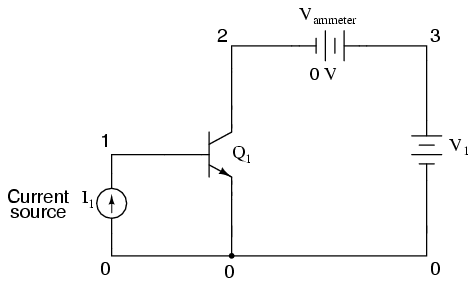 "Q" is the standard letter designation for a transistor in a schematic diagram, just as "R" is for resistor and "C" is for capacitor. In this circuit, we have an NPN transistor powered by a battery (V1) and controlled by current through a current source (I1). A current source is a device that outputs a specific amount of current, generating as much or as little voltage as necessary across its terminals to ensure that exact amount of current through it. Current sources are notoriously difficult to find in nature (unlike voltage sources, which by contrast attempt to maintain a constant voltage, outputting as much or as little current in the fulfillment of that task), but can be simulated with a small collection of electronic components. As we are about to see, transistors themselves tend to mimic the constant-current behavior of a current source in their ability to regulate current at a fixed value.

In the SPICE simulation, I'll set the current source at a constant value of 20 µA, then vary the voltage source (V1) over a range of 0 to 2 volts and monitor how much current goes through it. The "dummy" battery (Vammeter) with its output of 0 volts serves merely to provide SPICE with a circuit element for current measurement. 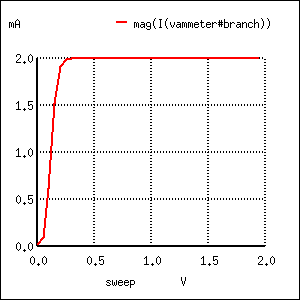 Let's see what happens if we vary the battery voltage over a wider range, this time from 0 to 50 volts. We'll keep the base current steady at 20 µA: 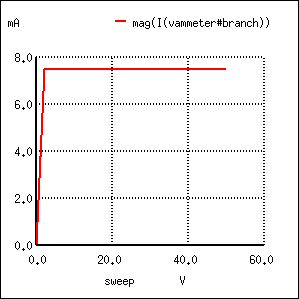 Not surprisingly, SPICE gives us a similar plot: a flat line, holding steady this time at 7.5 mA -- exactly 100 times the base current -- over the range of battery voltages from just above 0 volts to 50 volts. It appears that the base current is the deciding factor for collector current, the V1 battery voltage being irrelevant so long as its above a certain minimum level.

Often it is useful to superimpose several collector current/voltage graphs for different base currents on the same graph. A collection of curves like this -- one curve plotted for each distinct level of base current -- for a particular transistor is called the transistor's characteristic curves: 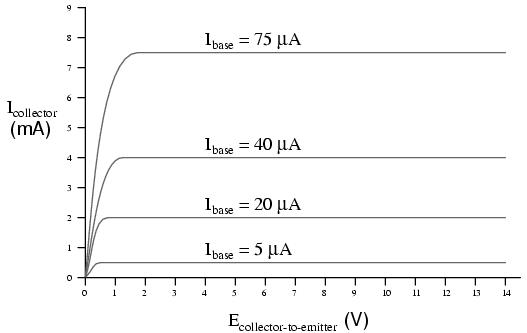 Sometimes the β ratio is designated as "hfe," a label used in a branch of mathematical semiconductor analysis known as "hybrid parameters" which strives to achieve very precise predictions of transistor performance with detailed equations. Hybrid parameter variables are many, but they are all labeled with the general letter "h" and a specific subscript. The variable "hfe" is just another (standardized) way of expressing the ratio of collector current to base current, and is interchangeable with "β." Like all ratios, β is unitless.

β for any transistor is determined by its design: it cannot be altered after manufacture. However, there are so many physical variables impacting β that it is rare to have two transistors of the same design exactly match. If a circuit design relies on equal β ratios between multiple transistors, "matched sets" of transistors may be purchased at extra cost. However, it is generally considered bad design practice to engineer circuits with such dependencies.

It would be nice if the β of a transistor remained stable for all operating conditions, but this is not true in real life. For an actual transistor, the β ratio may vary by a factor of over 3 within its operating current limits. For example, a transistor with advertised β of 50 may actually test with Ic/Ib ratios as low as 30 and as high as 100, depending on the amount of collector current, the transistor's temperature, and frequency of amplified signal, among other factors. For tutorial purposes it is adequate to assume a constant β for any given transistor (which is what SPICE tends to do in a simulation), but just realize that real life is not that simple!

Sometimes it is helpful for comprehension to "model" complex electronic components with a collection of simpler, better-understood components. The following is a popular model shown in many introductory electronics texts: 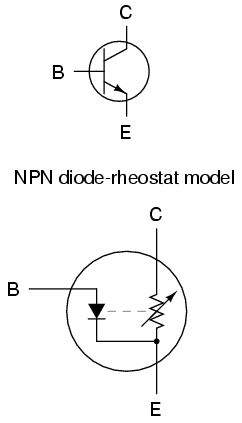 A better transistor model, often seen in more advanced textbooks, is this: 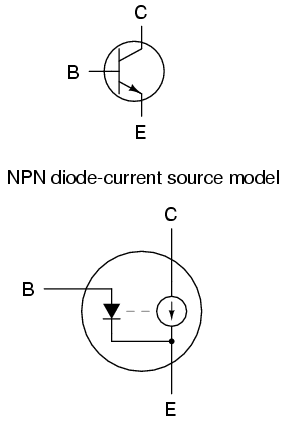 My own personal suggestion for a transistor model substitutes a constant-current diode for the current source: 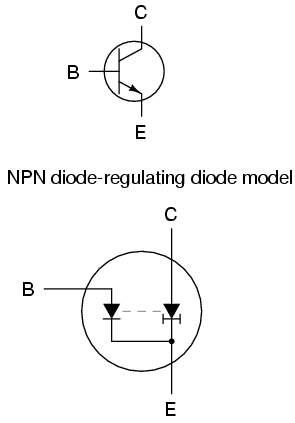 Since no diode ever acts as a source of electrical energy, this analogy escapes the false implication of the current source model as a source of power, while depicting the transistor's constant-current behavior better than the rheostat model. Another way to describe the constant-current diode's action would be to refer to it as a current regulator, so this transistor illustration of mine might also be described as a diode-current regulator model. The greatest disadvantage I see to this model is the relative obscurity of constant-current diodes. Many people may be unfamiliar with their symbology or even of their existence, unlike either rheostats or current sources, which are commonly known.