Regarding the headphones, the higher the "sensitivity" rating in decibels (dB), the better, but listening is believing: if you're serious about building a detector with maximum sensitivity for small electrical signals, you should try a few different headphone models at a high-quality audio store and "listen" for which ones produce an audible sound for the lowest volume setting on a radio or CD player. Beware, as you could spend hundreds of dollars on a pair of headphones to get the absolute best sensitivity! Take heart, though: I've used an old pair of Radio Shack "Realistic" brand headphones with perfectly adequate results, so you don't need to buy the best.

Normally, the transformer used in this type of application (audio speaker impedance matching) is called an "audio transformer," with its primary and secondary windings represented by impedance values (1000 Ω : 8 Ω) instead of voltages. An audio transformer will work, but I've found small step-down power transformers of 120/6 volt ratio to be perfectly adequate for the task, cheaper (especially when taken from an old thrift-store alarm clock radio), and far more rugged.

The tolerance (precision) rating for the 1 kΩ resistor is irrelevant. The 100 kΩ potentiometer is a recommended option for incorporation into this project, as it gives the user control over the loudness for any given signal. Even though an audio-taper potentiometer would be appropriate for this application, it is not necessary. A linear-taper potentiometer works quite well.

This experiment is identical in construction to the "Sensitive Voltage Detector" described in the DC experiments chapter. If you've already built this detector, you may skip this experiment.

The headphones, most likely being stereo units (separate left and right speakers) will have a three-contact plug. You will be connecting to only two of those three contact points. If you only have a "mono" headphone set with a two-contact plug, just connect to those two contact points. You may either connect the two stereo speakers in series or in parallel. I've found the series connection to work best, that is, to produce the most sound from a small signal:

Solder all wire connections well. This detector system is extremely sensitive, and any loose wire connections in the circuit will add unwanted noise to the sounds produced by the measured voltage signal. The two diodes connected in parallel with the transformer's primary winding, along with the series-connected 1 kΩ resistor, work together to "clip" the input voltage to a maximum of about 0.7 volts. This does one thing and one thing only: limit the amount of sound the headphones can produce. The system will work without the diodes and resistor in place, but there will be no limit to sound volume in the circuit, and the resulting sound caused by accidentally connecting the test leads across a substantial voltage source (like a battery) can be deafening!

Binding posts provide points of connection for a pair of test probes with banana-style plugs, once the detector components are mounted inside a box. You may use ordinary multimeter probes, or make your own probes with alligator clips at the ends for secure connection to a circuit.

Detectors are intended to be used for balancing bridge measurement circuits, potentiometric (null-balance) voltmeter circuits, and detect extremely low-amplitude AC ("alternating current") signals in the audio frequency range. It is a valuable piece of test equipment, especially for the low-budget experimenter without an oscilloscope. It is also valuable in that it allows you to use a different bodily sense in interpreting the behavior of a circuit.

For connection across any non-trivial source of voltage (1 volt and greater), the detector's extremely high sensitivity should be attenuated. This may be accomplished by connecting a voltage divider to the "front" of the circuit:

Adjust the 100 kΩ voltage divider potentiometer to about mid-range when initially sensing a voltage signal of unknown magnitude. If the sound is too loud, turn the potentiometer down and try again. If too soft, turn it up and try again. This detector even senses DC and radio-frequency signals (frequencies below and above the audio range, respectively), a "click" being heard whenever the test leads make or break contact with the source under test. With my cheap headphones, I've been able to detect currents of less than 1/10 of a microamp (< 0.1 µA) DC, and similarly low-magnitude RF signals up to 2 MHz.

A good demonstration of the detector's sensitivity is to touch both test leads to the end of your tongue, with the sensitivity adjustment set to maximum. The voltage produced by metal-to-electrolyte contact (called galvanic voltage) is very small, but enough to produce soft "clicking" sounds every time the leads make and break contact on the wet skin of your tongue.

Try unplugged the headphone plug from the jack (receptacle) and similarly touching it to the end of your tongue. You should still hear soft clicking sounds, but they will be much smaller in amplitude. Headphone speakers are "low impedance" devices: they require low voltage and "high" current to deliver substantial sound power. Impedance is a measure of opposition to any and all forms of electric current, including alternating current (AC). Resistance, by comparison, is a strictly measure of opposition to direct current (DC). Like resistance, impedance is measured in the unit of the Ohm (Ω), but it is symbolized in equations by the capital letter "Z" rather than the capital letter "R". We use the term "impedance" to describe the headphone's opposition to current because it is primarily AC signals that headphones are normally subjected to, not DC.

Most small signal sources have high internal impedances, some much higher than the nominal 8 Ω of the headphone speakers. This is a technical way of saying that they are incapable of supplying substantial amounts of current. As the Maximum Power Transfer Theorem predicts, maximum sound power will be delivered by the headphone speakers when their impedance is "matched" to the impedance of the voltage source. The transformer does this. The transformer also helps aid the detection of small DC signals by producing inductive "kickback" every time the test lead circuit is broken, thus "amplifying" the signal by magnetically storing up electrical energy and suddenly releasing it to the headphone speakers.

As with the low-voltage AC power supply experiment, I recommend building this detector in a permanent fashion (mounting all components inside of a box, and providing nice test lead wires) so it can be easily used in the future. Constructed as such, it might look something like this: 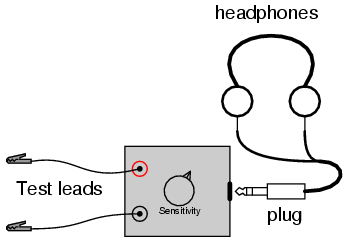