If you don't have an audio detector already constructed, you can use a nice set of audio headphones (closed-cup style, that completely covers your ears) and a 120V/6V step-down transformer to build a sensitive audio detector without volume control or overvoltage protection, just for this experiment.

Connect these portions of the headphone stereo plug to the transformer's secondary (6 volt) winding:

Try both the series and the parallel connection schemes for the loudest sound.

If you haven't made an audio detector as outlined in both the DC and AC experiments chapters, you really should -- it is a valuable piece of test equipment for your collection. 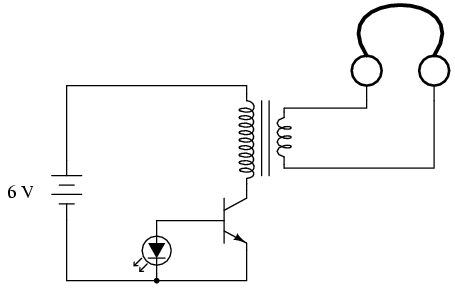 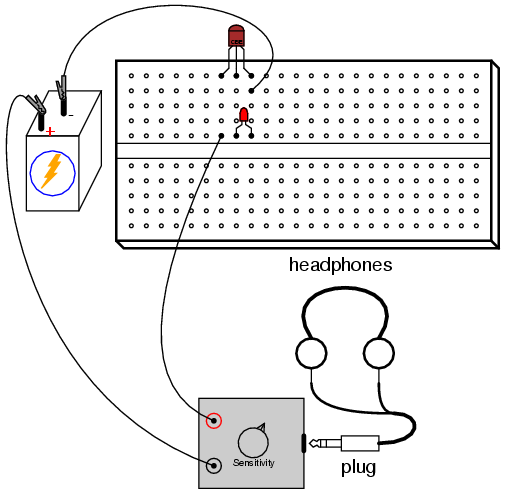 This circuit detects pulses of light striking the LED and converts them into relatively strong audio signals to be heard through the headphones. Forrest Mims teaches that LEDs have the ability to produce current when exposed to light, in a manner not unlike a semiconductor solar cell. [MIM] By itself, the LED does not produce enough electrical power to drive the audio detector circuit, so a transistor is used to amplify the LED's signals. If the LED is exposed to a pulsing source of light, a tone will be heard in the headphones.

Sources of light suitable for this experiment include fluorescent and neon lamps, which blink rapidly with the 60 Hz AC power energizing them. You may also try using bright sunlight for a steady light source, then waving your fingers in front of the LED. The rapidly passing shadows will cause the LED to generate pulses of voltage, creating a brief "buzzing" sound in the headphones.

LEDs serving as photo-detectors are narrow-band devices, responding to a narrow band of wavelengths close, but not identical, to that normally emitted. Infrared remote controls are a good illumination source for near-infrared LEDs employed as photo-sensors, producing a receiver sound. [MIM3]

With a little imagination, it is not difficult to grasp the concept of transmitting audio information -- such as music or speech -- over a beam of pulsing light. Given a suitable "transmitter" circuit to pulse an LED on and off with the positive and negative crests of an audio waveform from a microphone, the "receiver" circuit shown here would convert those light pulses back into audio signals. [MIM2]