A power transformer is specified, but any iron-core inductor will suffice, even the home-made inductor or transformer from the AC experiments chapter!

The diode need not be an exact model 1N4001. Any of the "1N400X" series of rectifying diodes are suitable for the task, and they are quite easy to obtain.

I recommend household light switches for their low cost and durability. 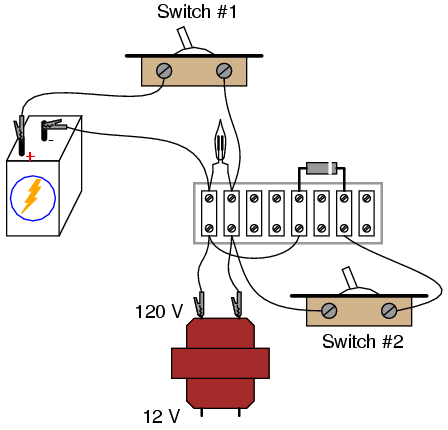 When assembling the circuit, be very careful of the diode's orientation. The cathode end of the diode (the end marked with a single band) must face the positive (+) side of the battery. The diode should be reverse-biased and nonconducting with switch #1 in the "on" position. Use the high-voltage (120 V) winding of the transformer for the inductor coil. The primary winding of a step-down transformer has more inductance than the secondary winding, and will give a greater lamp-flashing effect.

Set switch #2 to the "off" position. This disconnects the diode from the circuit so that it has no effect. Quickly close and open (turn "on" and then "off") switch #1. When that switch is opened, the neon bulb will flash from the effect of inductive "kickback." Rapid current decrease caused by the switch's opening causes the inductor to create a large voltage drop as it attempts to keep current at the same magnitude and going in the same direction.

Inductive kickback is detrimental to switch contacts, as it causes excessive arcing whenever they are opened. In this circuit, the neon lamp actually diminishes the effect by providing an alternate current path for the inductor's current when the switch opens, dissipating the inductor's stored energy harmlessly in the form of light and heat. However, there is still a fairly high voltage dropped across the opening contacts of switch #1, causing undue arcing and shortened switch life.

If switch #2 is closed (turned "on"), the diode will now be a part of the circuit. Quickly close and open switch #1 again, noting the difference in circuit behavior. This time, the neon lamp does not flash. Connect a voltmeter across the inductor to verify that the inductor is still receiving full battery voltage with switch #1 closed. If the voltmeter registers only a small voltage with switch #1 "on," the diode is probably connected backward, creating a short-circuit.