When plotted on a curve tracer, the characteristic curve for a normal PN junction rectifying diode looks something like this: 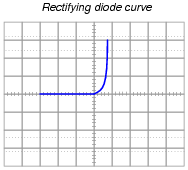 Label each axis (horizontal and vertical) of the curve tracer graph, then determine whether the diode behaves more like a voltage source or more like a current source (i.e. does it try to maintain constant voltage or does it try to maintain constant current?) when it is conducting current.
Models are very useful because they simplify circuit approximations. For example, we can analyze this diode circuit quite easily if we substitute an electrical source in place of the diode: 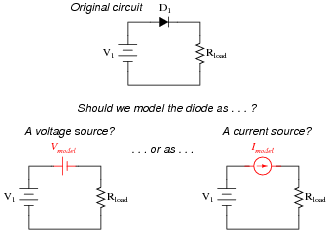 The only question here is, which substitution makes the most sense? Based on the diode's characteristic curve behavior, should we substitute a voltage source or a current source in place of it? Assuming this is a 1N4001 rectifying diode, what is the value we should use for the substituting source?

This behavior is similar to that of a voltage source once it is forward-biased and conducting current.
Follow-up question: quite obviously, diodes do not behave exactly as voltage sources. You cannot power anything off of a diode, for instance! Identify some of the limitations inherent to modeling diodes as voltage sources. Are there any instances you can think of where such a model could be misleading?


Notes:
Modeling nonlinear semiconductor components in terms of linear, idealized passive components is a time-honored "trick" used to simplify circuit analysis. Like all "tricks" and analogies, this one has definite limitations. The follow-up question's hint practically gives away examples of where such a model could be misleading!


If we were to "model" a neon lamp with a standard passive component (resistor, voltage source, current source, capacitor, or inductor) for the sake of mathematically analyzing a circuit containing a neon lamp, what component would best represent the characteristics of the lamp within its "glow" region? 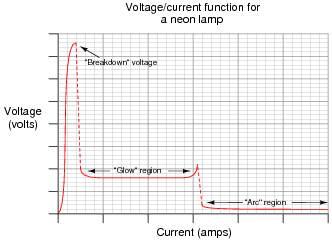 
Notes:
If your students are perplexed at the method of determining the answer, ask them this question: "For the neon lamp, what variable remains constant despite a wide variation in the other variable?"


If we were to "model" a transistor with a standard passive component (resistor, voltage source, current source, capacitor, or inductor) for the sake of mathematically analyzing a circuit containing a transistor, what component would best represent the characteristics of the transistor within its äctive" region? 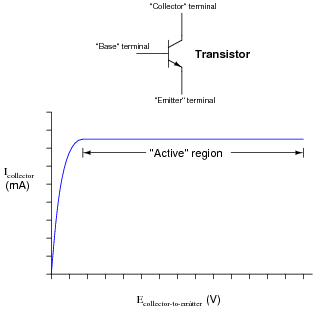 A transistor within its äctive" region would be best modeled by a current source.


Notes:
If your students are perplexed at the method of determining the answer, ask them this question: "For the transistor, what variable remains constant despite a wide variation in the other variable?" 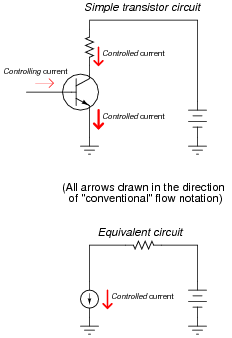 Suppose we needed to calculate the amount of current drawn from the 6-volt source in this dual-source transistor circuit: 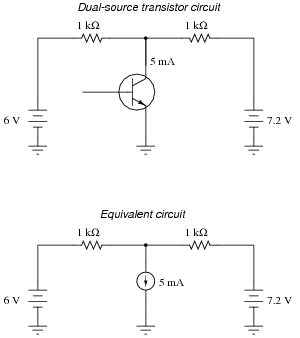 Kirchhoff's Voltage Law tells us that the algebraic sum of voltage drops around any "loop" in a circuit must equal zero. Based on all this data, calculate the value of I:

Hint: simultaneous equations are not needed to solve this problem!


Notes:
I wrote this question in such a way that it mimics branch/mesh current analysis, but with enough added information (namely, the current source's value) that there is only one variable to solve for. The idea here is to prepare students for realizing why simultaneous equations are necessary in more complex circuits (when the unknowns cannot all be expressed in terms of a single variable).


Models of complex electronic components are useful for circuit analysis, because they allow us to express the approximate behavior of the device in terms of ideal components with relatively simple mathematical behaviors. Transistors are a good example of components frequently modeled for the sake of amplifier circuit analysis:

It must be understood that models are never perfect replicas of the real thing. At some point, all models fail to precisely emulate the thing being modeled. The only real concern is how accurate we want our approximation to be: which characteristics of the component most concern us, and which do not.
For example, when analyzing the response of transistor amplifier circuits to small AC signals, it is often assumed that the transistor will be "biased" by a DC signal such that the base-emitter diode is always conducting. If this is the case, and all we are concerned with is how the transistor responds to AC signals, we may safely eliminate the diode junction from our transistor model:

However, even with the 0.7 volt (nominal) DC voltage drop absent from the model, there is still some impedance that an AC signal will encounter as it flows through the transistor. In fact, several distinct impedances exist within the transistor itself, customarily symbolized by resistors and lower-case r� designators: 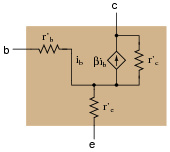 From the perspective of an AC current passing through the base-emitter junction of the transistor, explain why the following transistor models are equivalent:

These two models are equivalent because a given current (ib) will cause the exact same amount of voltage drop between base and emitter (v = i r):


The mathematical equivalence of these two expressions may be shown by factoring ib from all the terms in the left-hand model equation.


Notes:
The purpose of this question is to introduce students to the concept of BJT modeling, and also to familiarize them with some of the symbols and expressions commonly used in these models (as well as a bit of DC resistor network theory and algebra review, of course!).