What is the difference between DC and AC electricity? Identify some common sources of each type of electricity.

DC is an acronym meaning Direct Current: that is, electrical current that moves in one direction only. AC is an acronym meaning Alternating Current: that is, electrical current that periodically reverses direction (älternates").
Electrochemical batteries generate DC, as do solar cells. Microphones generate AC when sensing sound waves (vibrations of air molecules). There are many, many other sources of DC and AC electricity than what I have mentioned here!


Notes:
Discuss a bit of the history of AC versus DC in early power systems. In the early days of electric power in the United States of America, there was a heated debate between the use of DC versus AC. Thomas Edison championed DC, while George Westinghouse and Nikola Tesla advocated AC.
It might be worthwhile to mention that almost all the electric power in the world is generated and distributed as AC (Alternating Current), and not as DC (in other words, Thomas Edison lost the AC/DC battle!). Depending on the level of the class you are teaching, this may or may not be a good time to explain why most power systems use AC. Either way, your students will probably ask why, so you should be prepared to address this question in some way (or have them report any findings of their own!).


Suppose you are building a cabin far away from electric power service, but you desire to have electricity available to energize light bulbs, a radio, a computer, and other useful devices. Determine at least three different ways you could generate electrical power to supply the electric power needs at this cabin.

There are several different devices capable of producing electrical power for this cabin of yours:

For each of these devices, what is its operating principle, and where does it obtain its energy from?


Notes:
For each of these electric power ßources," there is a more fundamental source of energy. People often mistakenly think of generator devices as magic sources of energy, where they are really nothing more than energy converters: transforming energy from one form to another.


Where does the electricity come from that powers your home, or your school, or the streetlights along roads, or the many business establishments in your city? You will find that there are many different sources and types of sources of electrical power. In each case, try to determine where the ultimate source of that energy is.
For example, in a hydroelectric dam, the electricity is generated when falling water spins a turbine, which turns an electromechanical generator. But what continually drives the water to its üphill" location so that the process is continuous? What is the ultimate source of energy that is being harnessed by the dam?

Some sources of electrical power:

Notes:
A great point of conversation here is that almost all ßources" of energy have a common origin. The different ßources" are merely variant expressions of the same true source (with exceptions, of course!).


There is a fundamental Law in physics known as the Law of Energy Conservation. This law states that energy can neither be created nor destroyed, merely transformed from one form to another.
In regard to this Law, is it possible to make an electrical battery that lasts forever, and never becomes exhausted? Explain why or why not.

According to the Law of Energy Conservation, it is not possible to make a battery that lasts forever.


Notes:
This question may lead into a discussion on perpetual motion machines, a subject that seems to be perpetual itself in the popular interest.


The mathematical equivalence between watts and horsepower is approximately 746:1. Given this equivalency, how many watts of electrical energy may theoretically be produced by a generator, if turned by an engine rated at 50 horsepower?


Notes:
Unit conversion problems are handled most easily by using ünity fractions" comprised of a quotient of two different numerical quantities having the same physical value. For instance:


Suppose a person decides to attach an electrical generator to their exercise bicycle, so as to do something useful with their "pedal power" while they exercise. The first time this person uses their bicycle generator, the electricity is used to power a single 60-watt light bulb. However, the next time this person uses their bicycle generator, a second 60-watt light bulb is connected to the generator, for a total load of 120 watts.
When pedaling with the additional load, the person notices the bicycle is much more difficult to pedal than before. It takes greater force on the pedals to maintain the same speed as before, when there was only a single 60-watt light bulb to power. What would you say to this person if they asked you, the electricity expert, to explain why the bicycle is more difficult to pedal with the additional light bulb connected?

I won't give you the answer directly, but here is a hint: the Law of Energy Conservation.


Notes:
This phenomenon is more easily understood when experienced directly. If you happen to have a hand-powered generator available for a classroom demonstration, help your students set it up to demonstrate this principle.
An excellent topic of discussion related to this question is the effect that using more electrical power has on the generators at power plants (hydroelectric, nuclear, coal-fired, etc.). What would happen at the power plants supplying electricity to the nation's electrical "grid" if everyone simultaneously turned on all their electrical loads at home?


Where does the energy come from that causes a battery to be a source of electricity for powering electrical devices? Ultimately, what is the energy source of a battery?

Electrical batteries derive their energy from chemical compounds stored within.


Notes:
Battery electrochemistry is quite complex, and not easily addressed in a class environment unless all students have a good background knowledge of chemistry. It is not the point of this question to address issues of electrochemistry, but merely to point out the nature of a battery's energy source.


Describe what a fuel cell is, and what the practical importance of such a device might be.

"Fuel cells" are essentially batteries externally supplied with chemicals for their source of energy.


Notes:
Much attention has been directed toward fuel cells as energy conversion devices, for their high efficiency and environmentally "clean" operation. Your students should have no trouble finding current information on fuel cell technology.


What will happen, electrically speaking, when the shaft of the machine is turned?

A voltage will be ïnduced" in the wire coil as the magnet passes by.
Follow-up question: do you think the voltage generated by this machine would be DC or AC? Explain your answer.


Notes:
Although this machine would not be very efficient in the form shown in the illustration, it would work to generate electricity when turned. As such, it demonstrates the principle of electromagnetic induction.


Suppose there was something wrong in this electrical system. When the shaft of the generator is turned, the light bulb does not light up: 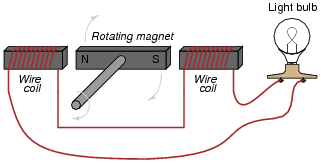 What are some of the possible causes of this failure? Please be specific. Also, what could you do to either confirm or deny these specific possibilities?

There may be an öpen" fault in the circuit somewhere, and/or the light bulb could be improperly sized for the generator's rated voltage output. I'll let you determine how certain diagnostic checks could be made in this system to determine the exact nature of the fault!


Notes:
This question poses an excellent opportunity to group discussion on troubleshooting theory and technique. There are several different ways in which the nature of the fault may be determined. Encourage your students to think creatively!