The MOS-gated thyristor uses a MOSFET to initiate conduction through the upper (PNP) transistor of a normal thyristor structure, thus triggering the device. Since a MOSFET requires negligible current to "drive" (cause it to saturate), this makes the thyristor as a whole very easy to trigger: 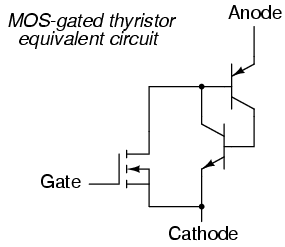 Given the fact that ordinary SCRs are quite easy to "drive" as it is, the practical advantage of using an even more sensitive device (a MOSFET) to initiate triggering is debatable. Also, placing a MOSFET at the gate input of the thyristor now makes it impossible to turn it off by a reverse-triggering signal. Only low-current dropout can make this device stop conducting after it has been latched. 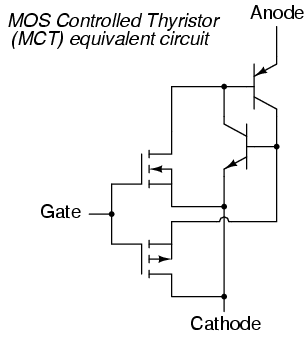 A positive gate voltage (with respect to the cathode) turns on the upper (N-channel) MOSFET, allowing base current through the upper (PNP) transistor, which latches the transistor pair in an "on" state. Once both transistors are fully latched, there will be little voltage dropped between anode and cathode, and the thyristor will remain latched so long as the controlled current exceeds the minimum (holding) current value. However, if a negative gate voltage is applied (with respect to the anode, which is at nearly the same voltage as the cathode in the latched state), the lower MOSFET will turn on and "short" between the lower (NPN) transistor's base and emitter terminals, thus forcing it into cutoff. Once the NPN transistor cuts off, the PNP transistor will drop out of conduction, and the whole thyristor turns off. Gate voltage has full control over conduction through the MCT: to turn it on and to turn it off.

This device is still a thyristor, though. If there is zero voltage applied between gate and cathode, neither MOSFET will turn on. Consequently, the bipolar transistor pair will remain in whatever state it was last in (hysteresis). So, a brief positive pulse to the gate turns the MCT on, a brief negative pulse forces it off, and no applied gate voltage lets it remain in whatever state it is already in. In essence, the MCT is a latching version of the IGBT (Insulated Gate Bipolar Transistor).