If we take the equivalent circuit for an SCR and add another external terminal, connected to the base of the top transistor and the collector of the bottom transistor, we have a device known as a silicon-controlled-switch, or SCS:

This extra terminal allows more control to be exerted over the device, particularly in the mode of forced commutation, where an external signal forces it to turn off while the main current through the device has not yet fallen below the holding current value. Consider the following circuit: 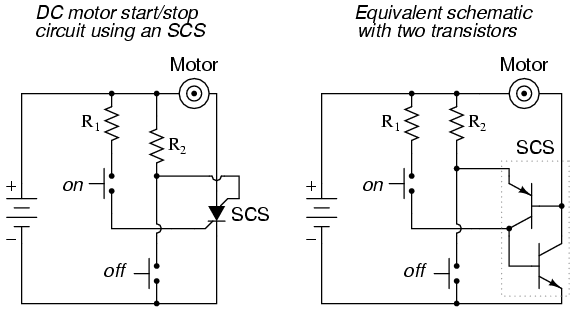 When the "on" pushbutton switch is actuated, there is a voltage applied between the cathode gate and the cathode, forward-biasing the lower transistor's base-emitter junction, and turning it on. The top transistor of the SCS is ready to conduct, having been supplied with a current path from its emitter terminal (the SCS's anode terminal) through resistor R2 to the positive side of the power supply. As in the case of the SCR, both transistors turn on and maintain each other in the "on" mode. When the lower transistor turns on, it conducts the motor's load current, and the motor starts and runs.

The motor may be stopped by interrupting the power supply, as with an SCR, and this is called natural commutation. However, the SCS provides us with another means of turning off: forced commutation by shorting the anode terminal to the cathode. If this is done (by actuating the "off" pushbutton switch), the upper transistor within the SCS will lose its emitter current, thus halting current through the base of the lower transistor. When the lower transistor turns off, it breaks the circuit for base current through the top transistor (securing its "off" state), and the motor (making it stop). The SCS will remain in the off condition until such time that the "on" pushbutton switch is re-actuated.