Small signal transistors are recommended so as to be able to experience "thermal runaway" in the latter portion of the experiment. Larger "power" transistors may not exhibit the same behavior at these low current levels. However, any pair of identical NPN transistors may be used to build a current mirror.

Beware that not all transistors share the same terminal designations, or pinouts, even if they share the same physical appearance. This will dictate how you connect the transistors together and to other components, so be sure to check the manufacturer's specifications (component datasheet), easily obtained from the manufacturer's website. Beware that it is possible for the transistor's package and even the manufacturer's datasheet to show incorrect terminal identification diagrams! Double-checking pin identities with your multimeter's "diode check" function is highly recommended. For details on how to identify bipolar transistor terminals using a multimeter, consult chapter 4 of the Semiconductor volume (volume III) of this book series. 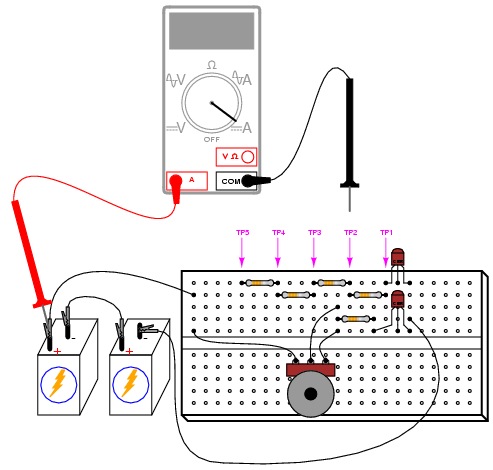 A current mirror may be thought of as an adjustable current regulator, the current limit being easily set by a single resistance. It is a rather crude current regulator circuit, but one that finds wide use due to its simplicity. In this experiment, you will get the opportunity to build one of these circuits, explore its current-regulating properties, and also experience some of its practical limitations firsthand.

Build the circuit as shown in the schematic and illustration. You will have one extra 1.5 kΩ fixed-value resistor from the parts specified in the parts list. You will be using it in the last part of this experiment.

Since voltage across the two transistors' base-emitter junctions is the same -- the two junction pairs being connected in parallel with each other -- so should the current be through their base terminals, assuming identical junction characteristics and identical junction temperatures. Matched transistors should have the same β ratios, as well, so equal base currents means equal collector currents. The practical result of all this is Q2's collector current mimicking whatever current magnitude has been established through the collector of Q1 by the potentiometer. In other words, current through Q2 mirrors the current through Q1.

Changes in load resistance (resistance connecting the collector of Q2 to the positive side of the battery) have no effect on Q1's current, and consequently have no effect upon the base-emitter voltage or base current of Q2. With a constant base current and a nearly constant β ratio, Q2 will drop as much or as little collector-emitter voltage as necessary to hold its collector (load) current constant. Thus, the current mirror circuit acts to regulate current at a value set by the potentiometer, without regard to load resistance.

Well, that is how it is supposed to work, anyway. Reality isn't quite so simple, as you are about to see. In the circuit diagram shown, the load circuit of Q2 is completed to the positive side of the battery through an ammeter, for easy current measurement. Rather than solidly connect the ammeter's black probe to a definite point in the circuit, I've marked five test points, TP1 through TP5, for you to touch the black test probe to while measuring current. This allows you to quickly and effortlessly change load resistance: touching the probe to TP1 results in practically no load resistance, while touching it to TP5 results in approximately 14.5 kΩ of load resistance.

You should note that the current regulation isn't perfect. Despite regulating the current at nearly the value for load resistances between 0 and 4.5 kΩ, there is some variation over this range. The regulation may be much worse if load resistance is allowed to rise too high. Try adjusting the potentiometer so that maximum current is obtained, as indicated with the ammeter test probe connected to TP1. Leaving the potentiometer at that position, move the meter probe to TP2, then TP3, then TP4, and finally TP5, noting the meter's indication at each connection point. The current should be regulated at a nearly constant value until the meter probe is moved to the last test point, TP5. There, the current indication will be substantially lower than at the other test points. Why is this? Because too much load resistance has been inserted into Q2's circuit. Simply put, Q2 cannot "turn on" any more than it already has, to maintain the same amount of current with this great a load resistance as with lesser load resistances.

An important caveat for current mirror circuits in general is that of equal temperature between the two transistors. The current "mirroring" taking place between the two transistors' collector circuits depends on the base-emitter junctions of those two transistors having the exact same properties. As the "diode equation" describes, the voltage/current relationship for a PN junction strongly depends on junction temperature. The hotter a PN junction is, the more current it will pass for a given amount of voltage drop. If one transistor should become hotter than the other, it will pass more collector current than the other, and the circuit will no longer "mirror" current as expected. When building a real current mirror circuit using discrete transistors, the two transistors should be epoxy-glued together (back-to-back) so that they remain at approximately the same temperature.

In this next phase of the experiment, we will intentionally allow one of the transistors to overheat and note the effects. To avoid damaging a transistor, this procedure should be conducted no longer than is necessary to observe load current begin to "run away." To begin, adjust the potentiometer for minimum current. Next, replace the 10 kΩ Rlimit resistor with a 1.5 kΩ resistor. This will allow a higher current to pass through Q1, and consequently through Q2 as well.

If you carefully touch both transistors with a finger, you should notice Q2 is warm, while Q1 is cool. Warning: if Q2's current has been allowed to "run away" too far or for too long a time, it may become very hot! You can receive a bad burn on your fingertip by touching an overheated semiconductor component, so be careful here!

What just happened to make Q2 overheat and lose current control? By connecting the ammeter to TP1, all load resistance was removed, so Q2 had to drop full battery voltage between collector and emitter as it regulated current. Transistor Q1 at least had the 1.5 kΩ resistance of Rlimit in place to drop most of the battery voltage, so its power dissipation was far less than that of Q2. This gross imbalance of power dissipation caused Q2 to heat more than Q1. As the temperature increased, Q2 began to pass more current for the same amount of base-emitter voltage drop. This caused it to heat up even faster, as it was passing more collector current while still dropping the full 12 volts between collector and emitter. The effect is known as thermal runaway, and it is possible in many bipolar junction transistor circuits, not just current mirrors.

It is important to remember that SPICE only recognizes the first eight characters of a component's name. The name "vammeter" is okay, but if we were to incorporate more than one current-measuring voltage source in the circuit and name them "vammeter1" and "vammeter2", respectively, SPICE would see them as being two instances of the same component "vammeter" (seeing only the first eight characters) and halt with an error. Something to bear in mind when altering the netlist or programming your own SPICE simulation!

You will have to experiment with different resistance values of Rload in this simulation to appreciate the current-regulating nature of the circuit. With Rlimit set to 10 kΩ and a power supply voltage of 12 volts, the regulated current through Rload will be 1.1 mA. SPICE shows the regulation to be perfect (isn't the virtual world of computer simulation so nice?), the load current remaining at 1.1 mA for a wide range of load resistances. However, if the load resistance is increased beyond 10 kΩ, even this simulation shows the load current suffering a decrease as in real life.