So far in our discussions on electricity and electric circuits, we have not discussed in any detail how batteries function. Rather, we have simply assumed that they produce constant voltage through some sort of mysterious process. Here, we will explore that process to some degree and cover some of the practical considerations involved with real batteries and their use in power systems.

In the first chapter of this book, the concept of an atom was discussed, as being the basic building-block of all material objects. Atoms, in turn, however, are composed of even smaller pieces of matter called particles. Electrons, protons, and neutrons are the basic types of particles found in atoms. Each of these particle types plays a distinct role in the behavior of an atom. While electrical activity involves the motion of electrons, the chemical identity of an atom (which largely determines how conductive the material will be) is determined by the number of protons in the nucleus (center). 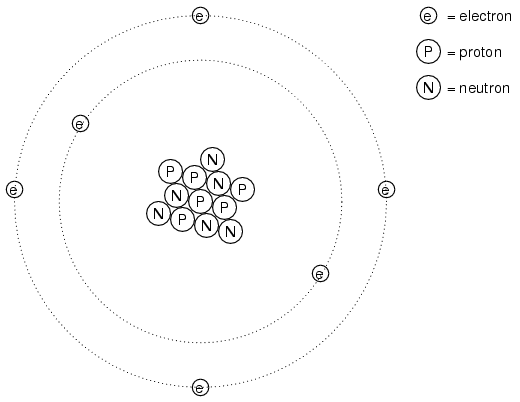 The protons in an atom's nucleus are extremely difficult to dislodge, and so the chemical identity of any atom is very stable. One of the goals of the ancient alchemists (to turn lead into gold) was foiled by this sub-atomic stability. All efforts to alter this property of an atom by means of heat. light, or friction were met with failure. The electrons of an atom, however, are much more easily dislodged. As we have already seen, friction is one way in which electrons can be transferred from one atom to another (glass and silk, wax and wool), and so is heat (generating voltage by heating a junction of dissimilar metals, as in the case of thermocouples).

Electrons can do much more than just move around and between atoms: they can also serve to link different atoms together. This linking of atoms by electrons is called a chemical bond. A crude (and simplified) representation of such a bond between two atoms might look like this: 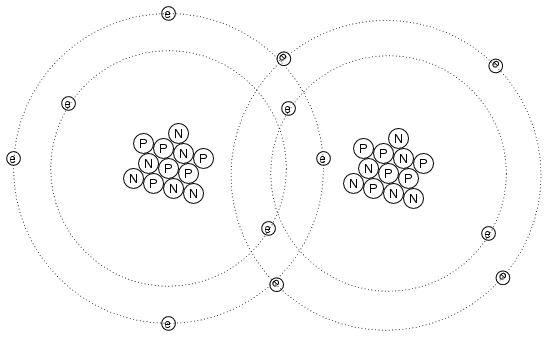 There are several types of chemical bonds, the one shown above being representative of a covalent bond, where electrons are shared between atoms. Because chemical bonds are based on links formed by electrons, these bonds are only as strong as the immobility of the electrons forming them. That is to say, chemical bonds can be created or broken by the same forces that force electrons to move: heat, light, friction, etc.

When atoms are joined by chemical bonds, they form materials with unique properties known as molecules. The dual-atom picture shown above is an example of a simple molecule formed by two atoms of the same type. Most molecules are unions of different types of atoms. Even molecules formed by atoms of the same type can have radically different physical properties. Take the element carbon, for instance: in one form, graphite, carbon atoms link together to form flat "plates" which slide against one another very easily, giving graphite its natural lubricating properties. In another form, diamond, the same carbon atoms link together in a different configuration, this time in the shapes of interlocking pyramids, forming a material of exceeding hardness. In yet another form, Fullerene, dozens of carbon atoms form each molecule, which looks something like a soccer ball. Fullerene molecules are very fragile and lightweight. The airy soot formed by excessively rich combustion of acetylene gas (as in the initial ignition of an oxy-acetylene welding/cutting torch) is composed of many tiny Fullerene molecules.

When alchemists succeeded in changing the properties of a substance by heat, light, friction, or mixture with other substances, they were really observing changes in the types of molecules formed by atoms breaking and forming bonds with other atoms. Chemistry is the modern counterpart to alchemy, and concerns itself primarily with the properties of these chemical bonds and the reactions associated with them.

A type of chemical bond of particular interest to our study of batteries is the so-called ionic bond, and it differs from the covalent bond in that one atom of the molecule possesses an excess of electrons while another atom lacks electrons, the bonds between them being a result of the electrostatic attraction between the two unlike charges. Consequently, ionic bonds, when broken or formed, result in electrons moving from one place to another. This motion of electrons in ionic bonding can be harnessed to generate an electric current. A device constructed to do just this is called a voltaic cell, or cell for short, usually consisting of two metal electrodes immersed in a chemical mixture (called an electrolyte) designed to facilitate a chemical reaction: 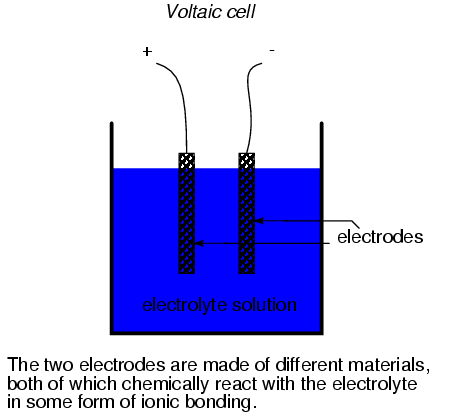 In the common "lead-acid" cell (the kind commonly used in automobiles), the negative electrode is made of lead (Pb) and the positive is made of lead peroxide (Pb02), both metallic substances. The electrolyte solution is a dilute sulfuric acid (H2SO4 + H2O). If the electrodes of the cell are connected to an external circuit, such that electrons have a place to flow from one to the other, negatively charged oxygen ions (O) from the positive electrode (PbO2) will ionically bond with positively charged hydrogen ions (H) to form molecules of water (H2O). This creates a deficiency of electrons in the lead peroxide (PbO2) electrode, giving it a positive electrical charge. The sulfate ions (SO4) left over from the disassociation of the hydrogen ions (H) from the sulfuric acid (H2SO4) will join with the lead (Pb) in each electrode to form lead sulfate (PbSO4): 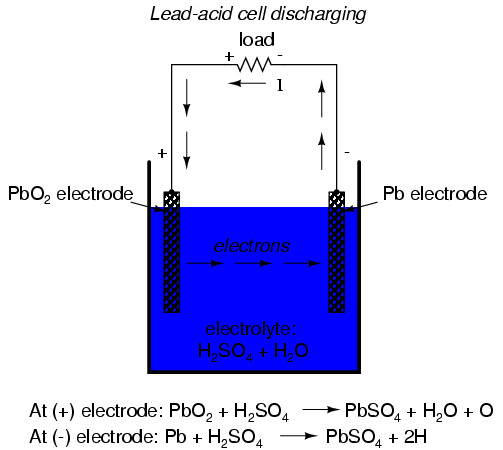 This process of the cell providing electrical energy to supply a load is called discharging, since it is depleting its internal chemical reserves. Theoretically, after all of the sulfuric acid has been exhausted, the result will be two electrodes of lead sulfate (PbSO4) and an electrolyte solution of pure water (H2O), leaving no more capacity for additional ionic bonding. In this state, the cell is said to be fully discharged. In a lead-acid cell, the state of charge can be determined by an analysis of acid strength. This is easily accomplished with a device called a hydrometer, which measures the specific gravity (density) of the electrolyte. Sulfuric acid is denser than water, so the greater the charge of a cell, the greater the acid concentration, and thus a denser electrolyte solution.

There is no single chemical reaction representative of all voltaic cells, so any detailed discussion of chemistry is bound to have limited application. The important thing to understand is that electrons are motivated to and/or from the cell's electrodes via ionic reactions between the electrode molecules and the electrolyte molecules. The reaction is enabled when there is an external path for electric current, and ceases when that path is broken.

Being that the motivation for electrons to move through a cell is chemical in nature, the amount of voltage (electromotive force) generated by any cell will be specific to the particular chemical reaction for that cell type. For instance, the lead-acid cell just described has a nominal voltage of 2.2 volts per cell, based on a fully "charged" cell (acid concentration strong) in good physical condition. There are other types of cells with different specific voltage outputs. The Edison cell, for example, with a positive electrode made of nickel oxide, a negative electrode made of iron, and an electrolyte solution of potassium hydroxide (a caustic, not acid, substance) generates a nominal voltage of only 1.2 volts, due to the specific differences in chemical reaction with those electrode and electrolyte substances.

The chemical reactions of some types of cells can be reversed by forcing electric current backwards through the cell (in the negative electrode and out the positive electrode). This process is called charging. Any such (rechargeable) cell is called a secondary cell. A cell whose chemistry cannot be reversed by a reverse current is called a primary cell.

When a lead-acid cell is charged by an external current source, the chemical reactions experienced during discharge are reversed: 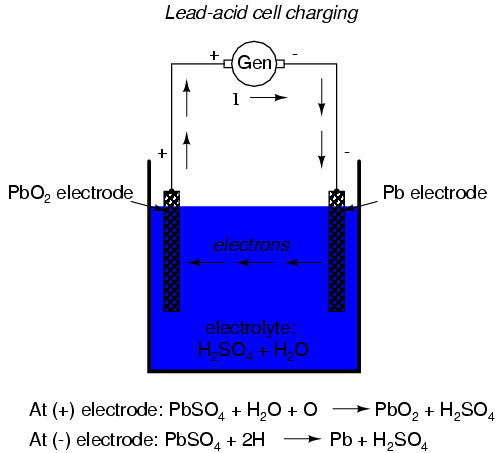