If at all possible, shut off the power to a circuit before performing any work on it. You must secure all sources of harmful energy before a system may be considered safe to work on. In industry, securing a circuit, device, or system in this condition is commonly known as placing it in a Zero Energy State. The focus of this lesson is, of course, electrical safety. However, many of these principles apply to non-electrical systems as well.

Securing something in a Zero Energy State means ridding it of any sort of potential or stored energy, including but not limited to:

Voltage by its very nature is a manifestation of potential energy. In the first chapter I even used elevated liquid as an analogy for the potential energy of voltage, having the capacity (potential) to produce current (flow), but not necessarily realizing that potential until a suitable path for flow has been established, and resistance to flow is overcome. A pair of wires with high voltage between them do not look or sound dangerous even though they harbor enough potential energy between them to push deadly amounts of current through your body. Even though that voltage isn't presently doing anything, it has the potential to, and that potential must be neutralized before it is safe to physically contact those wires.

All properly designed circuits have "disconnect" switch mechanisms for securing voltage from a circuit. Sometimes these "disconnects" serve a dual purpose of automatically opening under excessive current conditions, in which case we call them "circuit breakers." Other times, the disconnecting switches are strictly manually-operated devices with no automatic function. In either case, they are there for your protection and must be used properly. Please note that the disconnect device should be separate from the regular switch used to turn the device on and off. It is a safety switch, to be used only for securing the system in a Zero Energy State:

With the disconnect switch in the "open" position as shown (no continuity), the circuit is broken and no current will exist. There will be zero voltage across the load, and the full voltage of the source will be dropped across the open contacts of the disconnect switch. Note how there is no need for a disconnect switch in the lower conductor of the circuit. Because that side of the circuit is firmly connected to the earth (ground), it is electrically common with the earth and is best left that way. For maximum safety of personnel working on the load of this circuit, a temporary ground connection could be established on the top side of the load, to ensure that no voltage could ever be dropped across the load:

With the temporary ground connection in place, both sides of the load wiring are connected to ground, securing a Zero Energy State at the load.

Since a ground connection made on both sides of the load is electrically equivalent to short-circuiting across the load with a wire, that is another way of accomplishing the same goal of maximum safety: 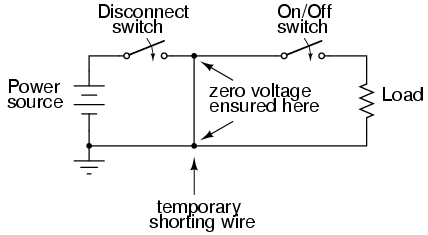 Either way, both sides of the load will be electrically common to the earth, allowing for no voltage (potential energy) between either side of the load and the ground people stand on. This technique of temporarily grounding conductors in a de-energized power system is very common in maintenance work performed on high voltage power distribution systems.

A further benefit of this precaution is protection against the possibility of the disconnect switch being closed (turned "on" so that circuit continuity is established) while people are still contacting the load. The temporary wire connected across the load would create a short-circuit when the disconnect switch was closed, immediately tripping any overcurrent protection devices (circuit breakers or fuses) in the circuit, which would shut the power off again. Damage may very well be sustained by the disconnect switch if this were to happen, but the workers at the load are kept safe.

It would be good to mention at this point that overcurrent devices are not intended to provide protection against electric shock. Rather, they exist solely to protect conductors from overheating due to excessive currents. The temporary shorting wires just described would indeed cause any overcurrent devices in the circuit to "trip" if the disconnect switch were to be closed, but realize that electric shock protection is not the intended function of those devices. Their primary function would merely be leveraged for the purpose of worker protection with the shorting wire in place.

Since it is obviously important to be able to secure any disconnecting devices in the open (off) position and make sure they stay that way while work is being done on the circuit, there is need for a structured safety system to be put into place. Such a system is commonly used in industry and it is called Lock-out/Tag-out.

A lock-out/tag-out procedure works like this: all individuals working on a secured circuit have their own personal padlock or combination lock which they set on the control lever of a disconnect device prior to working on the system. Additionally, they must fill out and sign a tag which they hang from their lock describing the nature and duration of the work they intend to perform on the system. If there are multiple sources of energy to be "locked out" (multiple disconnects, both electrical and mechanical energy sources to be secured, etc.), the worker must use as many of his or her locks as necessary to secure power from the system before work begins. This way, the system is maintained in a Zero Energy State until every last lock is removed from all the disconnect and shutoff devices, and that means every last worker gives consent by removing their own personal locks. If the decision is made to re-energize the system and one person's lock(s) still remain in place after everyone present removes theirs, the tag(s) will show who that person is and what it is they're doing.

Even with a good lock-out/tag-out safety program in place, there is still need for diligence and common-sense precaution. This is especially true in industrial settings where a multitude of people may be working on a device or system at once. Some of those people might not know about proper lock-out/tag-out procedure, or might know about it but are too complacent to follow it. Don't assume that everyone has followed the safety rules!

After an electrical system has been locked out and tagged with your own personal lock, you must then double-check to see if the voltage really has been secured in a zero state. One way to check is to see if the machine (or whatever it is that's being worked on) will start up if the Start switch or button is actuated. If it starts, then you know you haven't successfully secured the electrical power from it.

Additionally, you should always check for the presence of dangerous voltage with a measuring device before actually touching any conductors in the circuit. To be safest, you should follow this procedure of checking, using, and then checking your meter:

While this may seem excessive or even paranoid, it is a proven technique for preventing electrical shock. I once had a meter fail to indicate voltage when it should have while checking a circuit to see if it was "dead." Had I not used other means to check for the presence of voltage, I might not be alive today to write this. There's always the chance that your voltage meter will be defective just when you need it to check for a dangerous condition. Following these steps will help ensure that you're never misled into a deadly situation by a broken meter.

Finally, the electrical worker will arrive at a point in the safety check procedure where it is deemed safe to actually touch the conductor(s). Bear in mind that after all of the precautionary steps have taken, it is still possible (although very unlikely) that a dangerous voltage may be present. One final precautionary measure to take at this point is to make momentary contact with the conductor(s) with the back of the hand before grasping it or a metal tool in contact with it. Why? If, for some reason there is still voltage present between that conductor and earth ground, finger motion from the shock reaction (clenching into a fist) will break contact with the conductor. Please note that this is absolutely the last step that any electrical worker should ever take before beginning work on a power system, and should never be used as an alternative method of checking for dangerous voltage. If you ever have reason to doubt the trustworthiness of your meter, use another meter to obtain a "second opinion."