A three phase motor may be run from a single phase power source. (Figure below) However, it will not self-start. It may be hand started in either direction, coming up to speed in a few seconds. It will only develop 2/3 of the 3-φ power rating because one winding is not used.

3-φmotor runs from 1-φ power, but does not start.

The single coil of a single phase induction motor does not produce a rotating magnetic field, but a pulsating field reaching maximum intensity at 0o and 180o electrical. (Figure below)

Another view is that the single coil excited by a single phase current produces two counter rotating magnetic field phasors, coinciding twice per revolution at 0o (Figure above-a) and 180o (figure e). When the phasors rotate to 90o and -90o they cancel in figure b. At 45o and -45o (figure c) they are partially additive along the +x axis and cancel along the y axis. An analogous situation exists in figure d. The sum of these two phasors is a phasor stationary in space, but alternating polarity in time. Thus, no starting torque is developed.

However, if the rotor is rotated forward at a bit less than the synchronous speed, It will develop maximum torque at 10% slip with respect to the forward rotating phasor. Less torque will be developed above or below 10% slip. The rotor will see 200% - 10% slip with respect to the counter rotating magnetic field phasor. Little torque (see torque vs slip curve) other than a double freqency ripple is developed from the counter rotating phasor. Thus, the single phase coil will develop torque, once the rotor is started. If the rotor is started in the reverse direction, it will develop a similar large torque as it nears the speed of the backward rotating phasor.

One way to solve the single phase problem is to build a 2-phase motor, deriving 2-phase power from single phase. This requires a motor with two windings spaced apart 90o electrical, fed with two phases of current displaced 90o in time. This is called a permanent-split capacitor motor in Figure below.

This type of motor suffers increased current magnitude and backward time shift as the motor comes up to speed, with torque pulsations at full speed. The solution is to keep the capacitor (impedance) small to minimize losses. The losses are less than for a shaded pole motor. This motor configuration works well up to 1/4 horsepower (200watt), though, usually applied to smaller motors. The direction of the motor is easily reversed by switching the capacitor in series with the other winding. This type of motor can be adapted for use as a servo motor, described elsewhere is this chapter. 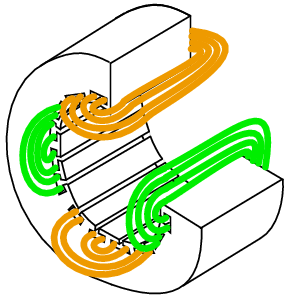 Single phase induction motors may have coils embedded into the stator as shown in Figure above for larger size motors. Though, the smaller sizes use less complex to build concentrated windings with salient poles.

In Figure below a larger capacitor may be used to start a single phase induction motor via the auxiliary winding if it is switched out by a centrifugal switch once the motor is up to speed. Moreover, the auxiliary winding may be many more turns of heavier wire than used in a resistance split-phase motor to mitigate excessive temperature rise. The result is that more starting torque is available for heavy loads like air conditioning compressors. This motor configuration works so well that it is available in multi-horsepower (multi-kilowatt) sizes.

A variation of the capacitor-start motor (Figure below) is to start the motor with a relatively large capacitor for high starting torque, but leave a smaller value capacitor in place after starting to improve running characteristics while not drawing excessive current. The additional complexity of the capacitor-run motor is justified for larger size motors.

If an auxiliary winding of much fewer turns of smaller wire is placed at 90o electrical to the main winding, it can start a single phase induction motor. (Figure below) With lower inductance and higher resistance, the current will experience less phase shift than the main winding. About 30o of phase difference may be obtained. This coil produces a moderate starting torque, which is disconnected by a centrifugal switch at 3/4 of synchronous speed. This simple (no capacitor) arrangement serves well for motors up to 1/3 horsepower (250 watts) driving easily started loads. 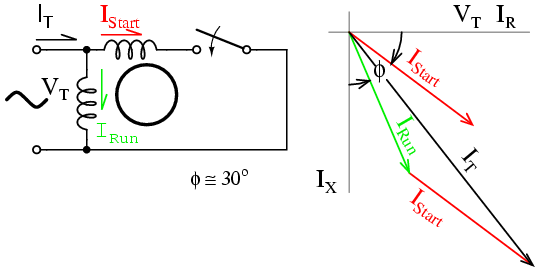 This motor has more starting torque than a shaded pole motor (next section), but not as much as a two phase motor built from the same parts. The current density in the auxiliary winding is so high during starting that the consequent rapid temperature rise precludes frequent restarting or slow starting loads.

Since single-phase motors are about 2 to 4 times as inefficient as three-phase motors, there is potential energy savings for 1-φ motors. There is no savings for a fully loaded motor since all the stator magnetizing current is required. The voltage cannot be reduced. But there is potential savings from a less than fully loaded motor. A nominal 117 VAC motor is designed to work at as high as 127 VAC, as low as 104 VAC. That means that it is not fully loaded when operated at greater than 104 VAC, for example, a 117 VAC refrigerator. It is safe for the power factor controller to lower the line voltage to 104-110 VAC. The higher the initial line voltage, the greater the potential savings. Of course, if the power company delivers closer to 110 VAC, the motor will operate more efficiently without any add-on device.

Any substantially idle, 25% FLC or less, single phase induction motor is a candidate for a PFC. Though, it needs to operate a large number of hours per year. And the more time it idles, as in a lumber saw, punch press, or conveyor, the greater the possibility of paying for the controller in a few years operation. It should be easier to pay for it by a factor of three as compared to the more efficient 3-φ-motor. The cost of a PFC cannot be recovered for a motor operating only a few hours per day. [7]