More on the ``skin effect''

As previously mentioned, the skin effect is where alternating current tends to avoid travel through the center of a solid conductor, limiting itself to conduction near the surface. This effectively limits the cross-sectional conductor area available to carry alternating electron flow, increasing the resistance of that conductor above what it would normally be for direct current: (Figure below) 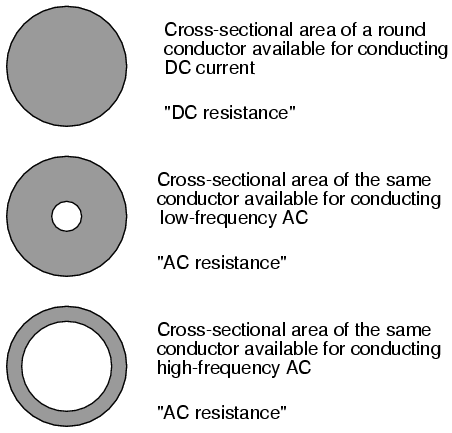 In some radio applications (antennas, most notably) this effect is exploited. Since radio-frequency (“RF”) AC currents wouldn't travel through the middle of a conductor anyway, why not just use hollow metal rods instead of solid metal wires and save both weight and cost? (Figure below) Most antenna structures and RF power conductors are made of hollow metal tubes for this reason.

In the following photograph you can see some large inductors used in a 50 kW radio transmitting circuit. The inductors are hollow copper tubes coated with silver, for excellent conductivity at the “skin” of the tube: 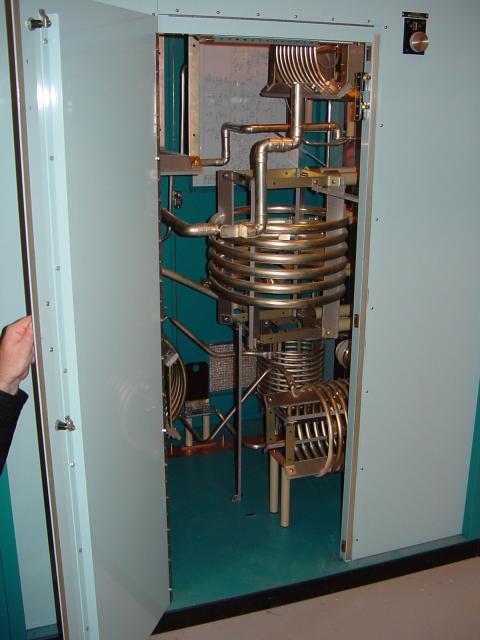 The degree to which frequency affects the effective resistance of a solid wire conductor is impacted by the gauge of that wire. As a rule, large-gauge wires exhibit a more pronounced skin effect (change in resistance from DC) than small-gauge wires at any given frequency. The equation for approximating skin effect at high frequencies (greater than 1 MHz) is as follows:

Table below gives approximate values of “k” factor for various round wire sizes.


For example, a length of number 10-gauge wire with a DC end-to-end resistance of 25 Ω would have an AC (effective) resistance of 2.182 kΩ at a frequency of 10 MHz:

Please remember that this figure is not impedance, and it does not consider any reactive effects, inductive or capacitive. This is simply an estimated figure of pure resistance for the conductor (that opposition to the AC flow of electrons which does dissipate power in the form of heat), corrected for the skin effect. Reactance, and the combined effects of reactance and resistance (impedance), are entirely different matters.