Now we can proceed to studying specific types of digital storage devices. To start, I want to explore some of the technologies which do not require any moving parts. These are not necessarily the newest technologies, as one might suspect, although they will most likely replace moving-part technologies in the future.

If we desire more than one bit's worth of storage (and we probably do), we'll have to have many latches arranged in some kind of an array where we can selectively address which one (or which set) we're reading from or writing to. Using a pair of tristate buffers, we can connect both the data write input and the data read output to a common data bus line, and enable those buffers to either connect the Q output to the data line (READ), connect the D input to the data line (WRITE), or keep both buffers in the High-Z state to disconnect D and Q from the data line (unaddressed mode). One memory "cell" would look like this, internally: 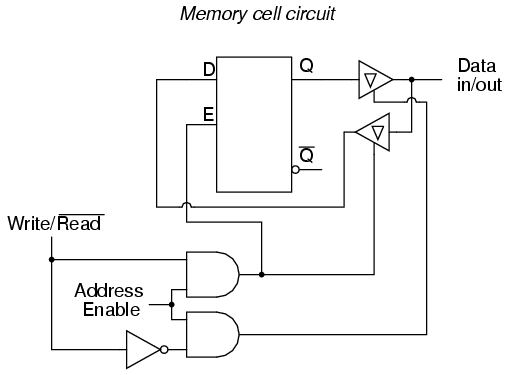 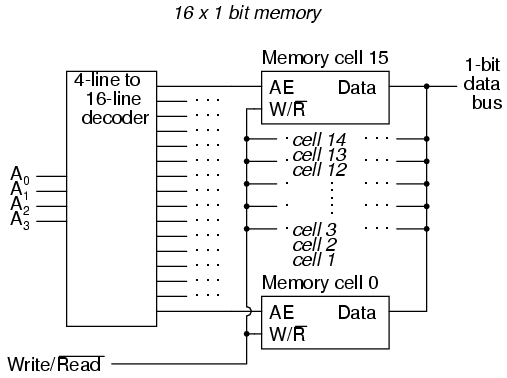 In the above circuit, 16 memory cells are individually addressed with a 4-bit binary code input into the decoder. If a cell is not addressed, it will be disconnected from the 1-bit data bus by its internal tristate buffers: consequently, data cannot be either written or read through the bus to or from that cell. Only the cell circuit that is addressed by the 4-bit decoder input will be accessible through the data bus.

This simple memory circuit is random-access and volatile. Technically, it is known as a static RAM. Its total memory capacity is 16 bits. Since it contains 16 addresses and has a data bus that is 1 bit wide, it would be designated as a 16 x 1 bit static RAM circuit. As you can see, it takes an incredible number of gates (and multiple transistors per gate!) to construct a practical static RAM circuit. This makes the static RAM a relatively low-density device, with less capacity than most other types of RAM technology per unit IC chip space. Because each cell circuit consumes a certain amount of power, the overall power consumption for a large array of cells can be quite high. Early static RAM banks in personal computers consumed a fair amount of power and generated a lot of heat, too. CMOS IC technology has made it possible to lower the specific power consumption of static RAM circuits, but low storage density is still an issue.

To address this, engineers turned to the capacitor instead of the bistable multivibrator as a means of storing binary data. A tiny capacitor could serve as a memory cell, complete with a single MOSFET transistor for connecting it to the data bus for charging (writing a 1), discharging (writing a 0), or reading. Unfortunately, such tiny capacitors have very small capacitances, and their charge tends to "leak" away through any circuit impedances quite rapidly. To combat this tendency, engineers designed circuits internal to the RAM memory chip which would periodically read all cells and recharge (or "refresh") the capacitors as needed. Although this added to the complexity of the circuit, it still required far less componentry than a RAM built of multivibrators. They called this type of memory circuit a dynamic RAM, because of its need of periodic refreshing.

Recent advances in IC chip manufacturing has led to the introduction of flash memory, which works on a capacitive storage principle like the dynamic RAM, but uses the insulated gate of a MOSFET as the capacitor itself.

Before the advent of transistors (especially the MOSFET), engineers had to implement digital circuitry with gates constructed from vacuum tubes. As you can imagine, the enormous comparative size and power consumption of a vacuum tube as compared to a transistor made memory circuits like static and dynamic RAM a practical impossibility. Other, rather ingenious, techniques to store digital data without the use of moving parts were developed.