Iron wire may be obtained from a hardware store. If some cannot be found, aluminum wire also works. 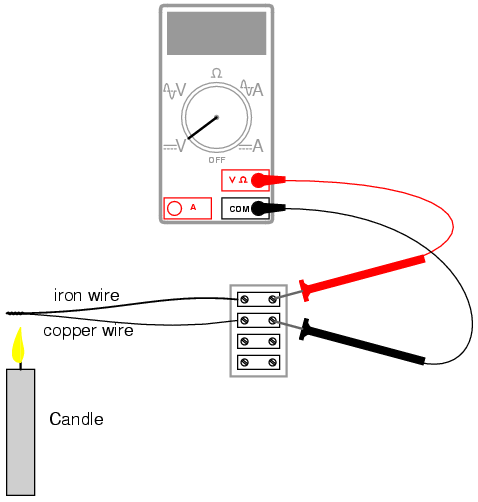 Twist one end of the iron wire together with one end of the copper wire. Connect the free ends of these wires to respective terminals on a terminal strip. Set your voltmeter to its most sensitive range and connect it to the terminals where the wires attach. The meter should indicate nearly zero voltage.

What you have just constructed is a thermocouple: a device which generates a small voltage proportional to the temperature difference between the tip and the meter connection points. When the tip is at a temperature equal to the terminal strip, there will be no voltage produced, and thus no indication seen on the voltmeter.

Light a candle and insert the twisted-wire tip into the flame. You should notice an indication on your voltmeter. Remove the thermocouple tip from the flame and let cool until the voltmeter indication is nearly zero again. Now, touch the thermocouple tip to an ice cube and note the voltage indicated by the meter. Is it a greater or lesser magnitude than the indication obtained with the flame? How does the polarity of this voltage compare with that generated by the flame?

After touching the thermocouple tip to the ice cube, warm it by holding it between your fingers. It may take a short while to reach body temperature, so be patient while observing the voltmeter's indication.

A thermocouple is an application of the Seebeck effect: the production of a small voltage proportional to a temperature gradient along the length of a wire. This voltage is dependent upon the magnitude of the temperature difference and the type of wire. Directly measuring the Seebeck voltage produced along a length of continuous wire from a temperature gradient is quite difficult, and so will not be attempted in this experiment.

Thermocouples, being made of two dissimilar metals joined at one end, produce a voltage proportional to the temperature of the junction. The temperature gradient along both wires resulting from a constant temperature at the junction produces different Seebeck voltages along those wires' lengths, because the wires are made of different metals. The resultant voltage between the two free wire ends is the difference between the two Seebeck voltages: 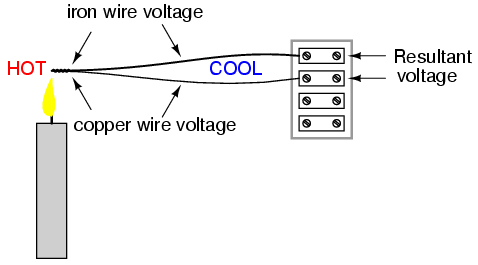 Thermocouples are widely used as temperature-sensing devices because the mathematical relationship between temperature difference and resultant voltage is both repeatable and fairly linear. By measuring voltage, it is possible to infer temperature. Different ranges of temperature measurement are possible by selecting different metal pairs to be joined together.