Old alternators may be obtained for low prices at automobile wrecking yards. Many yards have alternators already removed from the automobile, for your convenience. I do not recommend paying full price for a new alternator, as used units cost far less money and function just as well for the purposes of this experiment.

I highly recommend using a Delco-Remy brand of alternator. This is the type used on General Motors (GMC, Chevrolet, Cadillac, Buick, Oldsmobile) vehicles. One particular model has been produced by Delco-Remy since the early 1960's with little design change. It is a very common unit to locate in a wrecking yard, and very easy to work with.

An automotive alternator is a three-phase generator with a built-in rectifier circuit consisting of six diodes. As the sheave (most people call it a "pulley") is rotated by a belt connected to the automobile engine's crankshaft, a magnet is spun past a stationary set of three-phase windings (called the stator), usually connected in a Y configuration. The spinning magnet is actually an electromagnet, not a permanent magnet. Alternators are designed this way so that the magnetic field strength can be controlled, in order that output voltage may be controlled independently of rotor speed. This rotor magnet coil (called the field coil, or simply field) is energized by battery power, so that it takes a small amount of electrical power input to the alternator to get it to generate a lot of output power.

Electrical power is conducted to the rotating field coil through a pair of copper "slip rings" mounted concentrically on the shaft, contacted by stationary carbon "brushes." The brushes are held in firm contact with the slip rings by spring pressure.

Many modern alternators are equipped with built-in "regulator" circuits that automatically switch battery power on and off to the rotor coil to regulate output voltage. This circuit, if present in the alternator you choose for the experiment, is unnecessary and will only impede your study if left in place. Feel free to "surgically remove" it, just make sure you leave access to the brush terminals so that you can power the field coil with the alternator fully assembled. 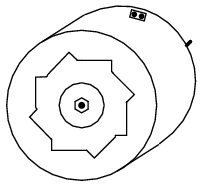 First, consult an automotive repair manual on the specific details of your alternator. The documentation provided in the book you're reading now is as general as possible to accommodate different brands of alternators. You may need more specific information, and a service manual is the best place to obtain it.

Disassemble the unit and locate terminals for connecting to the two carbon brushes. Solder a pair of wires to these terminals (at least 20 gauge in size) and extend these wires through vent holes in the alternator case, making sure they won't get snagged on the spinning rotor when the alternator is re-assembled and used.

Locate the three-phase line connections coming from the stator windings and connect wires to them as well, extending these wires outside the alternator case through some vent holes. Use the largest gauge wire that is convenient to work with for these wires, as they may be carrying substantial current. As with the field wires, route them in such a way that the rotor will turn freely with the alternator reassembled. The stator winding line terminals are easy to locate: the three of them connect to three terminals on the diode assembly, usually with "ring-lug" terminals soldered to the ends of the wires. 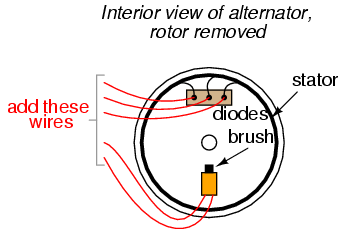 I recommend that you solder ring-lug terminals to your wires, and attach them underneath the terminal nuts along with the stator wire ends, so that each diode block terminal is securing two ring lugs.

Re-assemble the alternator, taking care to secure the carbon brushes in a retracted position so that the rotor doesn't damage them upon re-insertion. On Delco-Remy alternators, a small hole is provided on the back case half, and also at the front of the brush holder assembly, through which a paper clip or thin-gauge wire may be inserted to hold the brushes back against their spring pressure. Consult the service manual for more details on alternator assembly.

When the alternator has been assembled, try spinning the shaft and listen for any sounds indicative of colliding parts or snagged wires. If there is any such trouble, take it apart again and correct whatever is wrong.

If and when it spins freely as it should, connect the two "field" wires to a 6-volt battery. Connect an voltmeter to any two of the three-phase line connections: 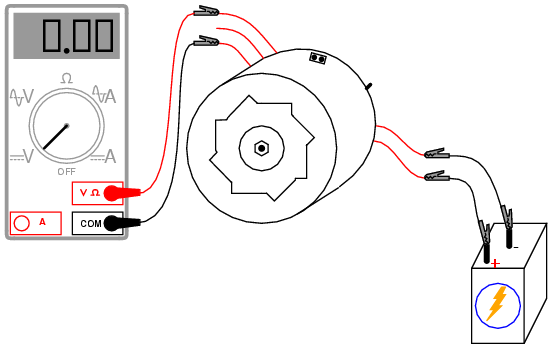 With the multimeter set to the "DC volts" function, slowly rotate the alternator shaft. The voltmeter reading should alternate between positive and negative as the shaft it turned: a demonstration of very slow alternating voltage (AC voltage) being generated. If this test is successful, switch the multimeter to the "AC volts" setting and try again. Try spinning the shaft slow and fast, comparing voltmeter readings between the two conditions.

Now, try connecting 12 volts DC to the field wires. Repeat the DC voltmeter, AC voltmeter, and short-circuit tests described above. What difference(s) do you notice?

Find some sort of polarity-insensitive 6 or 12 volts loads, such as small incandescent lamps, and connect them to the three-phase line wires. Wrap a thin rope or heavy string around the groove of the sheave ("pulley") and spin the alternator rapidly, and the loads should function.

If you have a second alternator, modify it as you modified the first one, connecting five of your own wires to the field brushes and stator line terminals, respectively. You can then use it as a three-phase motor, powered by the first alternator. 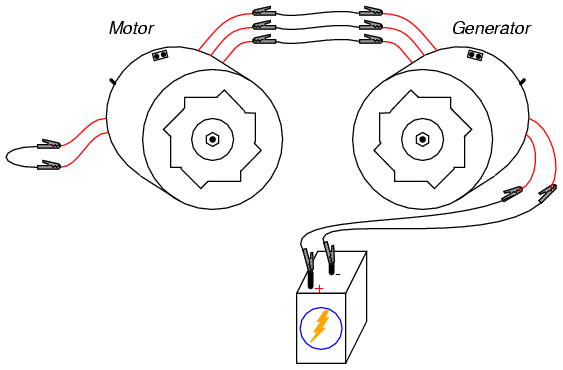 Spin the generator shaft while watching the motor shaft's rotation. Try reversing any two of the three-phase line connections between the two units and spin the generator again. What is different this time?

Connect the field wires of the motor unit to the a 6 volt battery (you may parallel-connect this field with the field of the generator unit, across the same battery terminals, if the battery is strong enough to deliver the several amps of current both coils will draw together). This will magnetize the rotor of the motor. Try spinning the generator again and note any differences in operation.

In the first motor setup, where the field wires were simple shorted together, the motor was functioning as an induction motor. In the second setup, where the motor's rotor was magnetized, it functioned as a synchronous motor.

If you are feeling particularly ambitious and are skilled in metal fabrication techniques, you may make your own high-power generator platform by connecting the modified alternator to a bicycle. I've built an arrangement that looks like this: 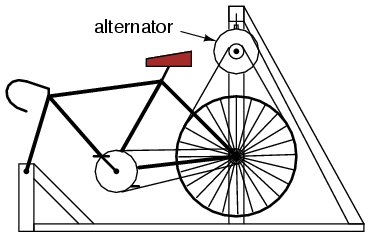 The rear wheel drives the generator sheave with a long v-belt. This belt also supports the rear of the bicycle, maintaining a constant tension when a rider is pedaling the bicycle. The generator hangs from a steel support structure (I used welded 2-inch square tubing, but a frame could be made out of lumber). Not only is this machine practical, but it is reliable enough to be used as an exercise machine, and it is inexpensive to make: 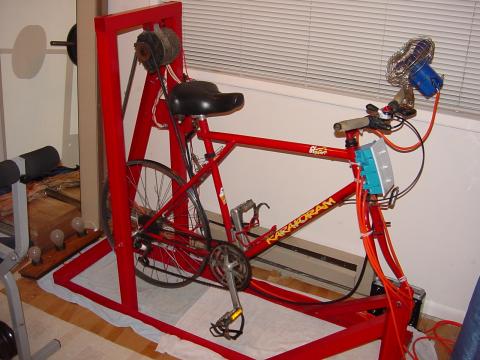 You can see a bank of three 12-volt "RV" light bulbs behind the bicycle unit (in the lower-left corner of the photograph), which I use for a load when riding the bicycle as an exercise machine. A set of three switches is mounted at the front of the bicycle, where I can turn loads on and off while riding.

By rectifying the three-phase AC power produced, it is possible to have the alternator power its own field coil with DC voltage, eliminating the need for a battery. However, some independent source of DC voltage will still be necessary for start-up, as the field coil must be energized before any AC power can be produced.