Research and describe what the Hall effect is, and list some practical uses of it.


Notes:
One of the most interesting applications of the Hall effect I've ever seen was an analog multiplier, which output a voltage signal proportional to the product of two input signals. In the specific example I saw, the two input signals were voltage and current for an AC load, the output of the Hall element representing instantaneous load power. A precise fraction of the AC load current passed through the Hall element, while a precise fraction of the AC load voltage energized a coil to generate a magnetic field flux perpendicular to the current (through the Hall element).


The following equation is a general model for Hall effect devices, describing the voltage produced by a Hall element given the current through it (I), the magnetic flux density (B) passing through perpendicular to the current, and the thickness (x) of the Hall element. The variable K is a constant accounting for variations in material composition and temperature, and for any combination of units represented by the other variables: 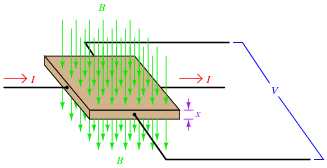 Explain what this equation means with regard to the effect of each variable (I, B, and x) on the Hall voltage generated. Identify whether each of the variables has a direct or an inverse effect on the output voltage.


Notes:
Discuss with your students what it means for a variable to have a direct or inverse effect on another, and ask them to provide examples other than the Hall effect equation. If they cannot think of any, suggest Ohm's Law.