This experiment only requires a single operational amplifier. The model 1458 and 353 are both "dual" op-amp units, with two complete amplifier circuits housed in the same 8-pin DIP package. I recommend that you purchase and use "dual" op-amps over "single" op-amps even if a project only requires one, because they are more versatile (the same op-amp unit can function in projects requiring only one amplifier as well as in projects requiring two). In the interest of purchasing and stocking the least number of components for your home laboratory, this makes sense. 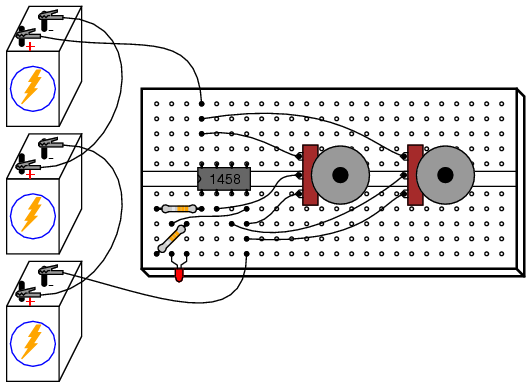 This behavior is much easier understood by experimenting with a comparator circuit than it is by reading someone's verbal description of it. In this experiment, two potentiometers supply variable voltages to be compared by the op-amp. The output status of the op-amp is indicated visually by the LED. By adjusting the two potentiometers and observing the LED, one can easily comprehend the function of a comparator circuit.

For greater insight into this circuit's operation, you might want to connect a pair of voltmeters to the op-amp input terminals (both voltmeters referenced to ground) so that both input voltages may be numerically compared with each other, these meter indications compared to the LED status: 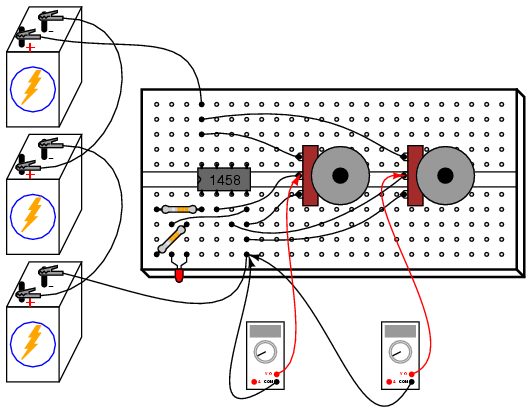 Comparator circuits are widely used to compare physical measurements, provided those physical variables can be translated into voltage signals. For instance, if a small generator were attached to an anemometer wheel to produce a voltage proportional to wind speed, that wind speed signal could be compared with a "set-point" voltage and compared by an op-amp to drive a high wind speed alarm: 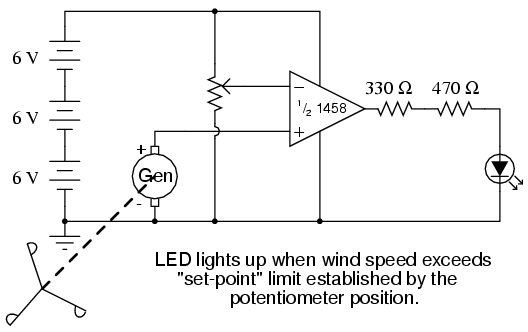